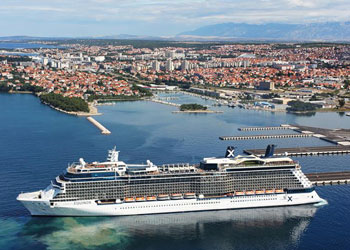 Celebrity Equinox arriving at the Port of Gazenica, near Zadar. From here it's a short shuttle bus ride to the center of Zadar old town. Smaller ships may dock directly at the Port of Zadar. 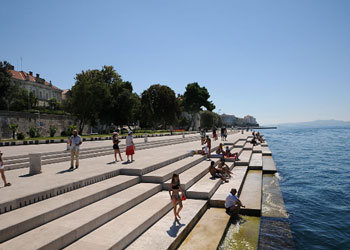 Zadar’s unique Sea Organ (Morske Orgulje) was designed by local architect Nikola Basic. A system of pipes and whistles is set into a series of stone steps that descend to the sea. As sea waves roll against the steps, a series of hypnotic notes, sighs and tones are produced. You can also swim from the steps while listening to the sounds, both from above and below water. 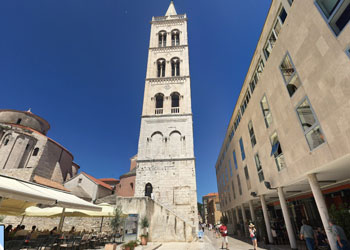 The view from the top of the St. Anastasia Cathedral Bell Tower is the best in Zadar. The spectacular panorama sweeps across the old town, inland hills, offshore islands, and the glittering sea. The climb is not difficult and takes only a few minutes. And while you’re in the vincinity, be sure to stroll around the town’s Roman Forum, which is adjacent to the Tower. 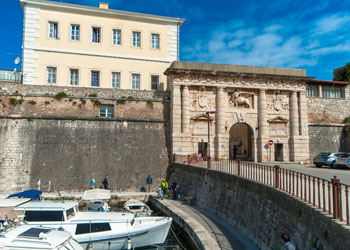 The magnificent Land Gate (Kopnena Vrata) was built by the Venetians in the mid 15th century, and served as the main point of entry through the city walls to the city. The gate is adorned with a wonderful relief of the St Mark’s Lion. Below the gate see the charming (also Venetian era) Fosa port.

During the 16th century Turkish forces made several attempts to capture the city. To help resist the sieges the Venetians masterminded the building of a large water cistern topped by 5 ornamental wells. Today the wells remain, and the plaza has the tautologically apt name 5 Wells Square (Trg 5 Bunara). Next to the square lies Queen Jelena Mdijevka Park (Perivoj kraljice Jelene Madijevke), a verdant park centered by a small hill, which offers (somewhat obstructed) views of the town. 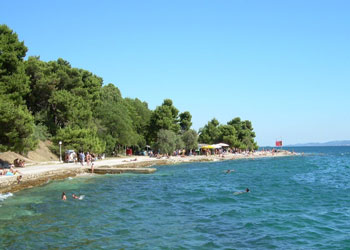 Kolovare Beach is a pebbly but pleasant beach a short walk south from the Land Gate. Perfect for a dip on a hot day!