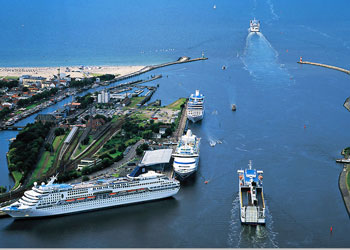 An aerial view of Warnemunde cruise port, Warnemunde, Germany. The train station is within easy walking distance of the cruise port, and here you can catch a train to Rostock (20 mins away). On busy days, overflow cruise ships may dock at Rostock Port's General Cargo Terminal (across the bay from the cruise port). 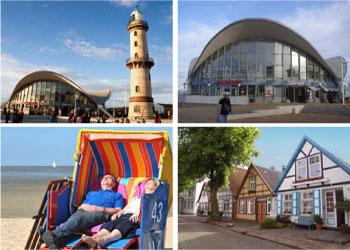 Warnemünde is a small seaside town with a long history as a fishing village. There’s a great selection of things to do. Visit the lighthouse for a panoramic view over the beach and town. Eat at a café in the wave-shaped Teapot, built in the bad old days of the DDR. Relax on the windswept beach, joining the locals by hiring a Strandkorb (multi-person beach chair/windbreak). Or stroll through the old part of town and admire the colorfully painted fishermen’s cottages. 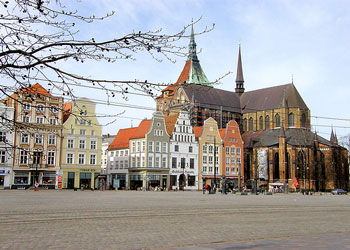 The city of Rostock was important in medieval times as a trading center for the merchants of the legendary 'Hanseatic League'. The city was extensively bombed in World War II, though fortuitously some historic buildings escaped damage. Highlights of the old town include the Marienkirche (St Marys Church) with its fine astronomical clock, and the adjoining Neuer Markt (New Market) which is surrounded by characterful (but rebuilt) medieval houses. 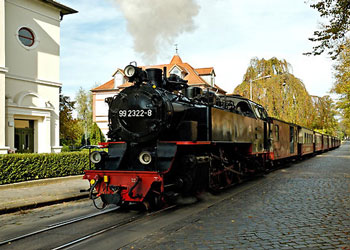 The steam locomotive powered Molli train runs along a picturesque route connecting Bad Doberan to the seaside resorts of Heiligendamm and Kuhlungsborn. To catch the Molli train, you need to take a bus from Warnemunde Wharf (near the cruise port) to Bad Doberan, a journey of about 20 minutes. 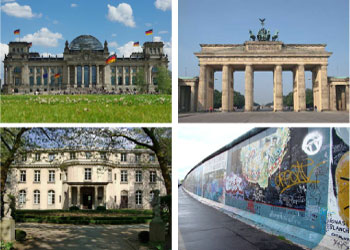 Germany’s largest and most famous city, Berlin, is a favorite cruise ship excursion from Warnemunde (but is is over 3 hours away by train). Must-see sights include the Reichstag (the German Parliament), the Brandenburg Gate (Berlin’s only remaining city gate), the Haus der Wannsee – Konferenz (where in 1942 the Reich Security met to plan the final solution), and the East Side Gallery (the longest remaining section of the Berlin Wall).