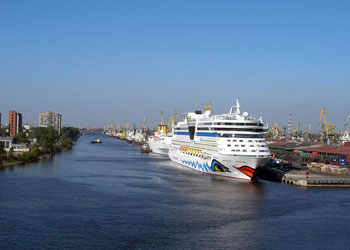 Cruise ship Aida Bella berthed in St Petersburg, Russia. The majority of cruise ships dock at the 'Marine Facade' at the Passenger Port of St Petersburg, about 4 miles west from the city center. Smaller ships may dock at the Lieutenant Schmidt Embankment or the English Embankment. Due to strict visa restrictions, nearly all passengers take either a ship’s tour, or a tour with a certified local tour operator. 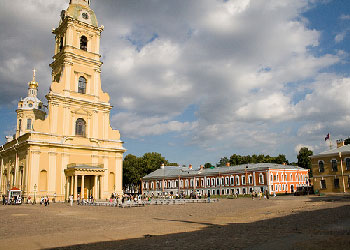 Tsar Peter I (or Peter the Great) had an amazing talent in technical, architectural, and mechanical subjects. His genius gave birth to the magnificent city of St Petersburg out of empty swampland. Peter I spent 1703 to 1709 in a small wooden hut designing and managing the construction of the city. The Peter and Paul Fortress was the first large building to be completed - it helped give Russia command of the Baltic. In the heart of the fortress stands the Cathedral of St Peter and St Paul, the burial place of the Romanov dynasty from Peter I onwards. 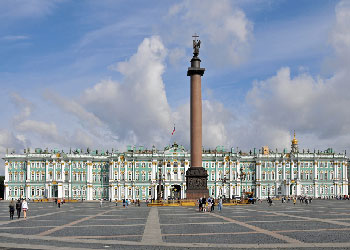 Catherine II founded the Hermitage in 1764 as a private museum, to which only she and her court had access. Successive tsars developed and enlargened the Hermitage, adding several magnificent buildings, the most impressive being the Winter Palace. The huge collection of art spans several centuries, from the classical period of Leonardo da Vinci, Rafael, Michelangelo, Titian, El Greco, Velasquez, Goya, and Rubens to fantastic impressionist works from Monet, Renoir, Cezanne, Van Gogh, Gauguin, Matisse and Picasso (to name but a few of many).


Church of our Saviour on Spilled Blood 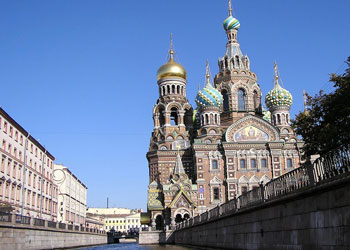 The Church of our Saviour on Spilled Blood was built on the spot where Tsar Alexander II was assassinated on March 1, 1881. The architect of the Cathedral modeled the building on the design of traditional Russian wooden churches resulting in a stunning and beautiful cathedral. With its golden domes, adorned with colored spirals and sculpted cupolas, the cathedral is a structure that amazes and impresses. Across from the cathedral you’ll find a lively street market, perfect for souvenir shopping.

Peterhof Palace (or Petrodvorets) was built as the summer home for Peter the Great and is considered the most dazzling of all the summer residences of the Russian tsars. During your tour, don’t miss Peter’s Oak Study, one of the few rooms to have survived unaltered. After visiting the palace, wander the Lower Park, with its famous water features and fountains. Peterhof is on the south coast of the Gulf of Finland, about 10 miles west of the port. 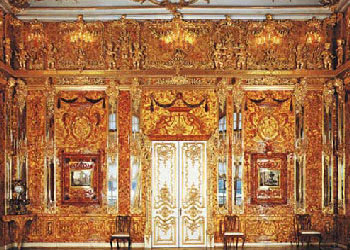 Catherine Palace was build in 1752 for Empress Elizabeth, who named it Catherine Palace in honor of her mother, Catherine I. The magnificent turquoise, white and gold Baroque frontage extends 1,000 feet and is decorated with hundreds of sculpted figures and columns. More than 100 ingots of pure gold were used for the exterior gilding. The highlight of the tour of the palace is the famous amber room. The original amber panels were a present from King Friedrich Wilhelm to Peter the Great, but these were looted by the Nazis, and have never been found. The room though has been painstakingly restored. Catherine Palace is near the town of Pushkin, about 15 miles south east of the port.