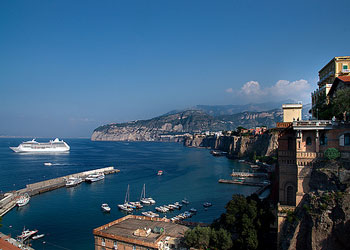 The harbor at Sorrento, Italy. Cruise ships anchor off the coast, and passengers are tendered into the dock at Marina Piccola. 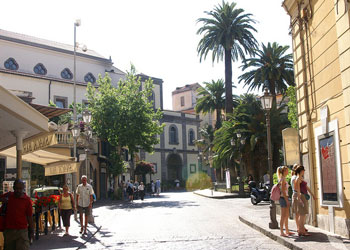 From the tender dock at Marin Piccola, take the blue shuttle bus for the short uphill ride to Plazza Tasso, the large square in the centre of Sorrento. There’s a good choice of shops around the square, selling favorites like limoncello liqueur, ceramics and glass. To continue on a short tour of the town’s highlights, head towards the sea to visit the 14th century Chiesa di San Francesco which has an immaculate cloister courtyard, then wander around the pretty cliff-hugging Villa Comunale gardens, which offer spectacular views over the Gulf of Napes. 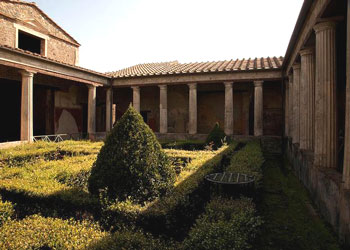 The Roman town of Pompeii was completely obliterated due a massive eruption of Mount Vesuvius in 79AD, which buried the town and its residents under a flash tide of ash. The site was meticulously excavated in the late 19th century, and today the visitor can walk through the streets, enter the shops and visit the homes just as they were seconds before the catastrophe. Pompeii is situated about 10 miles north east of Sorrento. The journey from Sorrento to Pompeii takes just 20 minutes on the Circumvesuviana train. 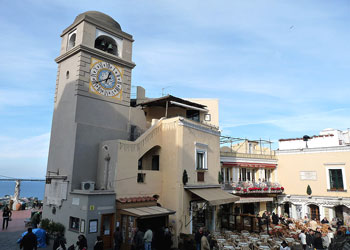 The famed island of Capri is a half hour ferry ride away from Sorrento. On arriving at the island, take the funicular (or bus) up the hill from Marina Grande (the lower town, where the ferry docks) to the picturesque upper Capri Town. It’s very touristy, but enjoyable nonetheless, with quaint buildings and streets, with attractive shops, cafes and bars. The hydrofoil to Capri departs from Marina Piccola, just by the cruise ship pier. 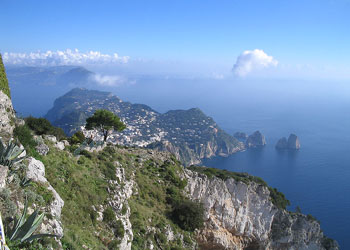 The view from the top of Mount Solaro is reputed to be one of the best in the Mediterranean. There’s no need to sweat blood and tears to reach the summit, as it’s accessible by the chairlift from Piazza Vittoria in Anacapri. Anacapri is a 10 minute bus journey away from Capri town. 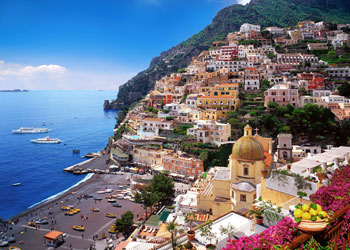 The popular but pebbly Spiaggia Grande Beach sits at the foot of spectacular Positano town. Along most of the beach there’s a charge to hire a sun recliner and use the facilities, though there is a small public section at the end. After some serious relaxing on the sand, have a snack at one of the many welcoming cafes or bars behind the beach. Positano is an hour from Sorrento by bus (on a very winding road!).