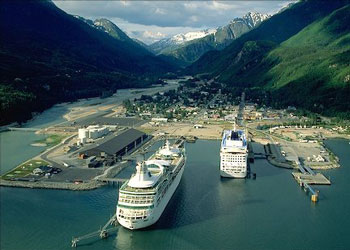 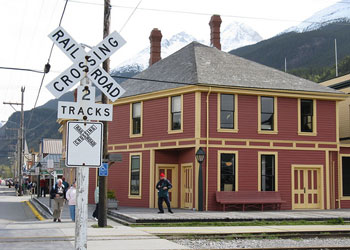 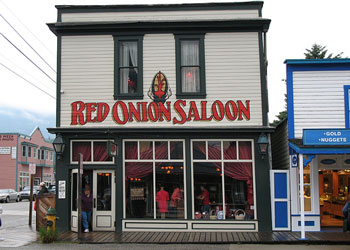 The famous Red Onion Saloon on Broadway is an authentic gold-rush-era style bar. In the late 19th century the business was half bordello, and you're still welcome to tour these once seedier parts of the building, with tour-guides dressed as madams. 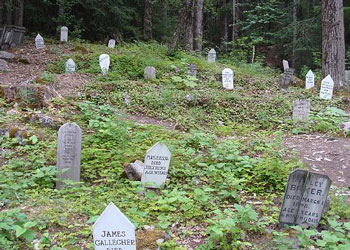 Fascinating Gold Rush Cemetery, which dates back to the late 1800s, is a short walk from town. From the cemetery a forest trail leads on to the spectacular Lower Reid Falls. To find the cemetery, go north on Broadway street through Skagway town to reach the railway yards. Follow a gravel road behind the railway yards and you'll find a sign to the cemetery. Total distance 4 mile round trip. 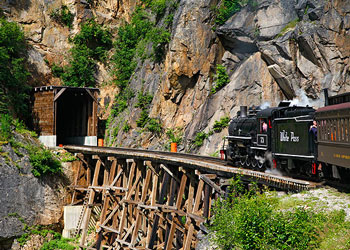 The 3-hour round trip train ride on the narrow gauge White Pass and Yukon Railroad to the top of White Pass makes a fantastic excursion. In the mid 1890s, huge numbers of gold prospectors would climb up to White Pass and continue onward to the gold fields. The need for a railroad to ease the arduous trip seemed obvious. The Railroad was constructed in the years 1898 through 1900 to connect Skagway with White Pass and then to Whitehorse, in Yukon. Unfortunately, by the time the railroad was completed the gold rush was over. The railroad climbs nearly 3000 feet in 20 miles, with cliff-hanging turns, numerous bridges and two tunnels hewn from the rock. The Skagway terminus is located 1/4 mile inland from the cruise pier. 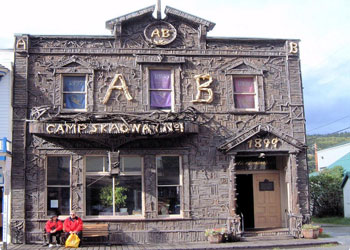 The Trail of '98 Museum is housed in the Arctic Brotherhood hall, constructed in 1899. The building's facade is perhaps the most photographed in Alaska, thanks to its unique decoration with pieces of driftwood. The museum has some excellent exhibits relating to the infamous con-artist Soapy Smith, and his shoot-out with Frank Reid.