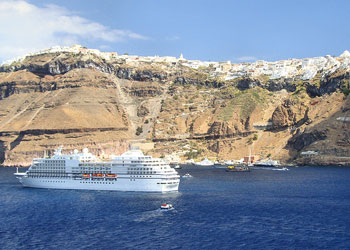 The Town of Thira, clinging to a cliff, the inside of a volcano caldera, above Santorini Bay, Greece. Cruise ships anchor off Thira and tender passengers to shore.


The Town of Thira 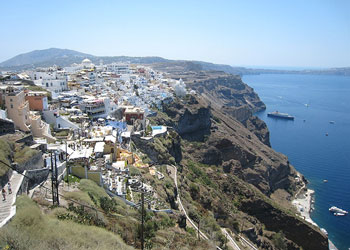 From the tender dock you have the choice of cable car, donkey ride or a 600 step climb to reach the town of Thira (also called Fira). Perched on a cliff above the azure seas of the Aegean sea, the whitewashed houses and churches make a beautiful sight. The picture above shows the view of the town from the top cable car station. 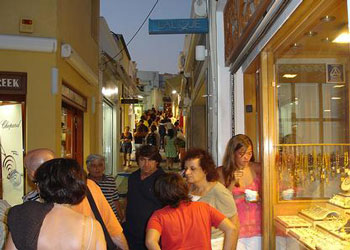 The main street of Thira, Odos Ipapantis (translated as Gold Street), starts just below the top station of the cable car. As its name implies, many jewelers line the street, selling opulent shining jewelry. Santorini goldsmiths are famous throughout the Mediterranean. 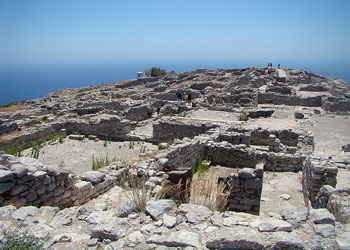 The majestic ruins of Ancient Thira are situated on Mesa Vouno, over 1000 ft above sea level. The city was established in the 9th century B.C. by Dorian colonists led by Theras, and was inhabited until the early Byzantine period. The preserved ruins belong to the classical Greek and Roman phases of the city. Ancient Thira is located 7 miles (11km) south east of Thira. 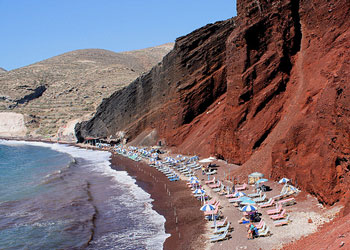 Read Beach is made up of red and black volcanic sands, and sits in a magnificent location under soaring cliffs, facing the blue clear seas of the Aegean. Red Beach is on the south west coast of the island, about 8 miles (13km) from Thira.


The Prehistoric City of Akrotiri 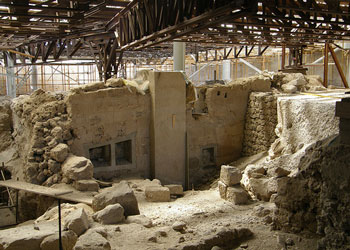 Akrotiri is the most important prehistoric settlement in the Eastern Mediterranean. Often nicknamed 'Prehistoric Pompeii', the city dates back to early Minoan times and was destroyed by a volcano in 1522 B.C. Protected under a metal roof, only a small part of the archaeological excavation work is on show. Akrotiri is sited in the south west tip of the island, 7 miles (11km) from Thira.