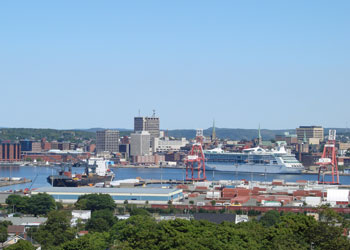 The Harbor at Saint John, New Brunswick. Cruise ship dock at the Marco Polo cruise terminal (serving berth Pugsley A/B) sited on the east shoreline of the harbor. There is a information center at the terminal where you can pick up useful maps and brochures for the town. Ships may also dock at the Long Wharf facility, at the northern end of the harbor. Downtown is within walking distance of both locations. 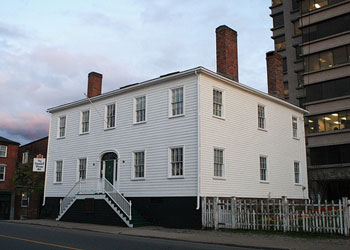 When the colonies won the United States Revolutionay War, loyalists to the Great Britain crown had to flee. Many came to Canada, establishing new settlements, one of which was Saint John on the foggy New Brunswick coast. Loyalist House on Union Street dates from that founding era. The house was constructed in 1811 by David Merrit, a Loyalist from Rye in New York. It is the oldest building in the city, surviving the Great Fire of 1877 thanks to a servant placing wet towels all around the house. The visitor can see many original features in the house, including a still-working piano-organ. There are several other sights nearby of historical interest, including Prince William Street, the County Courthouse, the Loyalist Burial Ground, the Old Saint John City Market, and Barbour’s General Store. All are within easy walking distance of the cruise terminal. 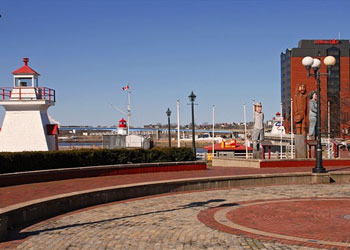 The Harbour Passage walking trail begins next to the Marco Polo cruise terminal. Three small lighthouses mark the start of the trail. The red colored path winds around the harbour, offering wonderful views across Saint John river and the Bay of Fundy, and finishes near the famous Reversing Falls. (Though keen walkers can continue for another 3000 miles, as Harbour Passage is Saint John’s access path to the Trans Canada Trail!) Along the way several signs explain the history and significance of the local landmarks, adding interest to the walk. 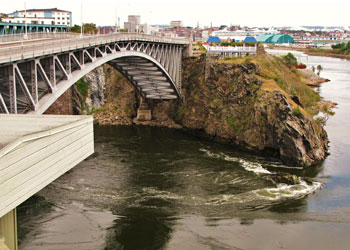 The Reversing Falls, located at the end of the Harbour Passage path, are a unique feature. During high tide, the water cascading down rapids on the Saint Johns river actually changes direction, to flow upstream. The phenomena results from the huge tidal range of Fundy bay, over 40 feet. Falls View park is the best place from which to view the swirling waters below. An alternative way to see the falls is by taking an exciting jet-boat ride. There is a regular bus service from City Hall, which is near the cruise terminals, to the Falls. 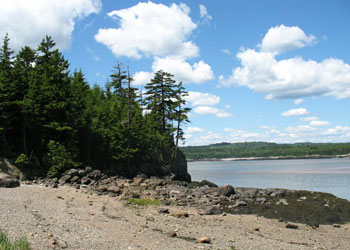 Hiking Irving Nature Park is a great way to see some of the spectacular coastal scenery of the Bay of Fundy. If you stick to the perimeter of the colored trails, you’ll follow an easy 4.5 mile path which runs through Acadian forest, visits mud-flats and salt-marsh, goes past tidal pools, and contours along cliffs falling into the ocean. But don’t forget to bring water and snacks, as there is no concession on site. The park is a 10 minute taxi ride away from downtown Saint John. 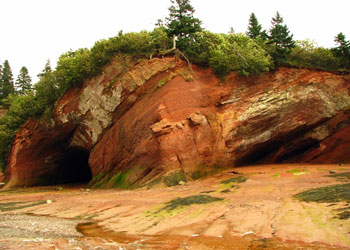 The most popular tour excursion from Saint John is St Martins a small picturesque fishing village, 25 miles (50 minutes) away to the east. The village is full of interesting attractions like a pretty fishing harbor, historic Victorian houses, a wide unspoiled beach, a beautifully landscaped park, and the famous sea caves.