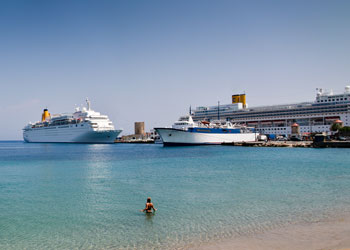 
Avenue of the Knights, Old Town 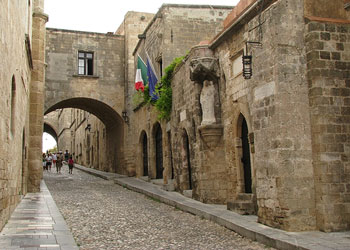 Walk into the Old Town through St Catherine's Gate then head right to find the fabulous Avenue of the Knights, built in medieval times (around the 14th century). The street was the place of residence of the Crusader Knights and is still excellently preserved. The Knights lived in one of seven inns, representing the seven faiths or tongues from whence they originated. The tall walls that line the street on either side - complete with codes of arms carved in stone - are foreboding and majestic at the same time. 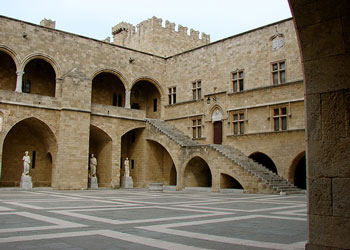 At the top of the Avenue of the Knights you'll spot the immense Palace of the Grand Masters, now an absorbing museum. It's a heavily fortified structure, built as the last line of defence should the city walls fall. The palace was the main meeting place for the Order of Knights of St John.


The Walls of the Old Town 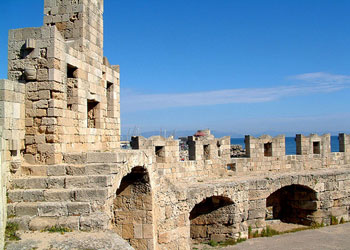 You can walk along the Old Town's walls, for a close up view of medieval Rhodes, and for magnificent panoramas of the surrounding new town, island and Aegean. The walls were built over a period of two centuries, work beginning around 1330. (Currently Tuesday and Saturday mornings only, entrance by the Grand Masters Palace). 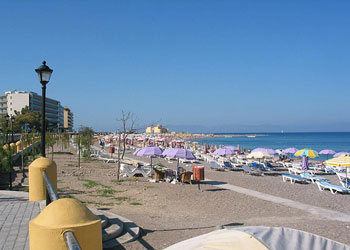 From the Old City, a short 10 minute walk northwards along the coastline past the famous Stag and Doe statues guarding the harbor takes you to Elli beach. It's a very popular beach, offering sunbeds, umbrellas, showers, watersports, beachside bars, and for the brave an offshore diving platform. 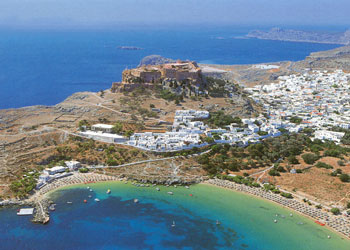 Lindos ia a picture-perfect Greek village, with whitewashed houses beside an impossibly aquamarine sea. It has a pretty beach, and lots of interesting shops and characterful restaurants and bars. But Lindos has something extra special, because next to the village stands a huge rock, surmounted by an intact walled acropolis. You can walk up the steep steps to the Acropolis, and explore the Temple of Athena, which dates back to the 4th century BC. Lindos is halfway down the southeast coast of Rhodes island and about 30 miles away from Rhodes town, which for DIY die hards equates to a 75 minute public bus journey from the East Side bus station (for less hassle join an organised shore excursion).