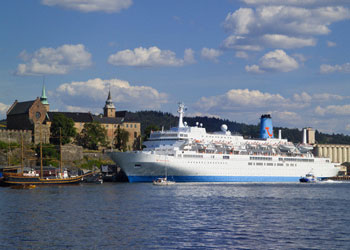 Thomson cruise ship moored at Oslo, Norway. Most cruise ships dock just minutes from the heart of the city, at the South Akershus quay cruise terminal, beneath Akershus Castle. On busy days your ship may alternatively dock at the Vippetangen, Filipstad or Revier quays, all of which are also convenient to the city center. 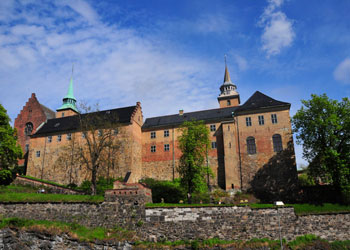 A tour of Akershus Fortress, which towers above the cruise ship quay, is a great way to learn a potted version of Oslo’s rich history. The castle dates from the 13th century, and has survived several attacks, many instigated by the Swedish crown. The Fortress also houses the Norwegian Resistance Museum, which details the clandestine and dangerous operations of the Norwegian Resistance in World War II. 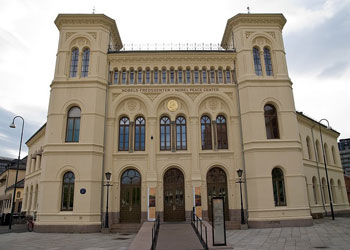 In his will Alfred Nobel instructed that the peace prize should be awarded in Norway, not his native Sweden, perhaps because of the relative pugnacity of Sweden. At the Nobel Prize Peace Center get to know the Peace Prize laureates from a series of fascinating exhibits. The Peace Prize is actually awarded at next-door City Hall, also well worth a visit. The Center is on the waterfront, a short walk from the Akershus cruise terminal. 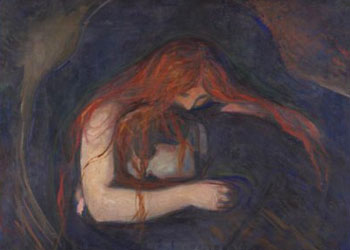 Edvard Munch suffered a life of tragedy, loosing his mother and sister as a child, and then his father as a teenager. As a forty year old he was hospitalized after a nervous breakdown and underwent electric shock therapy. Munch’s art, born perhaps from this mental cauldron, has real ’stop-and-stare’ quality. The artist left a substantial number of paintings to the city of Oslo, and these are now exhibited at the Munch Museum. The museum is situated about two-thirds of a mile inland from the cruise port. 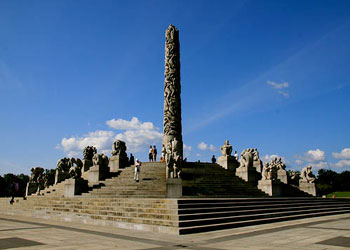 Vigeland Park showcases 212 works of the celebrated sculptur Gustav Vigeland. From the moment you arrive at the fabulous Main Gate, made from concrete and wrought iron with lanterns above, you realize you are in for a visual treat. The park is about 2 miles north-west of the city center, a short cab ride. 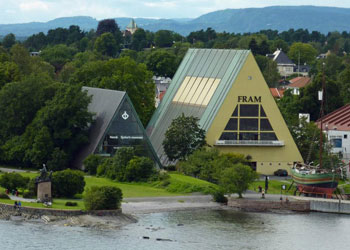 A short ferry ride from Oslo harbor takes you to the Bygdøy Peninsula, a lovely area with great views over the city, Oslo Bay and the mountains behind. On the peninsula you’ll find some of Oslo’s most popular museums, like the Viking Ship Museum, the Kon-Tiki Museum, the Norwegian Maritime Museum and the Norwegian Museum of Cultural History.