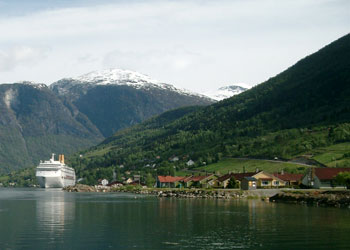 P&O cruise ship Oriana berthed at Olden, Norway. Cruise ships dock at the cruise pier on the east side of the Olden branch of the Nordfjord, about ½ mile from Olden village. 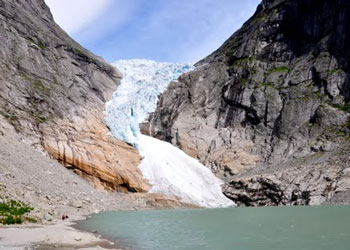 The Briksdal Glacier is the most accessible offshoot of the giant Jostedalsbreen, the largest glacier in Europe. The ice plunges from a height of over 3000 feet down to the narrow Brisdal valley, making a spectacular sight. A 25 km, 45 minute, bus trip along Olden Lake (Oldevatnet) will take you from the cruise pier to Briksdal mountain lodge, from where you can continue your journey to the glacier by walking (4 miles round trip) or by troll car. On returning from the glacier, stop by at the mountain lodge, which has a restaurant, café, and souvenir shop, perfect for refreshing break. 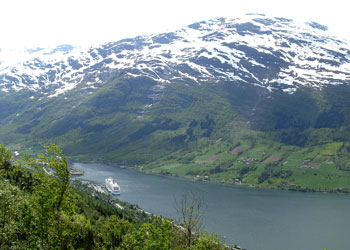 The tourist information office next to the cruise pier sells a map detailing walks in the area. One of the most popular is the Huaren Hike, a walk from the cruise pier up a series of gravel tracks above the east side of the fjord to a rock outcrop about 1200 feet above sea level. The top affords beautiful panoramic views across the fjord, Olden and Oldevatnet to the south, and Loen to the north. Allow about 2 hours for the walk. 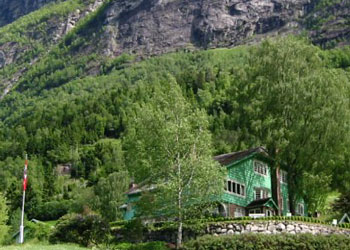 William Henry Singer Jr was an American impressionist artist who settled in Olden in 1912. At first he stayed at the village hotel, but then decided to build his own house, called Dalheim (now renamed Singerheimen). Singer was very weathly – he came from a monied steel family – and he donated considerable sums for the construction of the Nordfjord Hospital at Nordfjordeid. The house and art studio, kept much as it was in the early 20th century, is open for visitors, who can view its small collection of Singer paintings. Singerheimen is in the village of Olden. Check with the Tourist Information office at the pier to confirm viewing times.