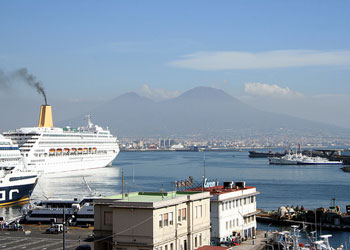 Cruise ship steaming out of Naples harbour, Vesuvius in background 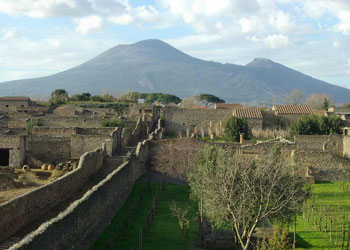 Pompeii was totally destroyed by an eruption of Vesuvius in 79AD. The Roman town was hit by lightning-quick ash flows, which completely covered the town and its 20,000 citizens. The site was carefully excavated in the 1860s, and today you can stroll the streets, visit the shops and enter the homes just as they were moments before the catastrophe. Located about 10 miles south east of Naples, just past the town of Torre Annunziata. Resourceful DIYers can make the journey from Naples to Pompeii by train. 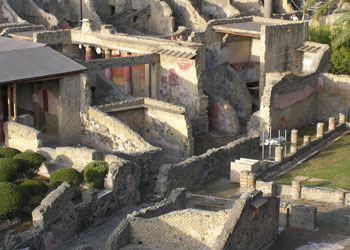 Herculaneum, a town of about 5000 people, stood in the narrow strip of land between Mount Vesuvius and the coast. It was wiped out by the same eruption that buried Pompeii. Partial excavations though have revealed even more detail than Pompeii, with hundreds of fascinating artefacts, like near intact wooden furniture and almost legible papyrus scrolls, many of which remain in-situ. Herculaneum is located about half way along the road from Naples to Pompeii. 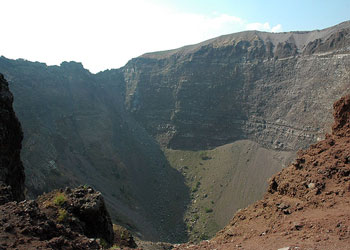 Regular buses from both Pompeii and Herculaneum railway stations climb up the slopes of Mount Vesuvius, and stop at a parking lot a short distance from the summit of this barely dormant volcano. You can then hike the steep path to the crater rim (850m in distance, and 200m of elevation) which takes around half-an-hour. The views of the half-kilometer wide caldera and the Tyrrhenian sea far below are breathtaking. 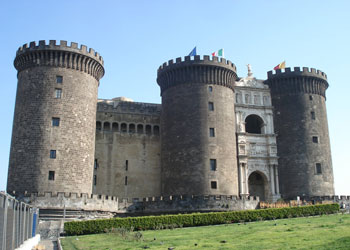 The huge Castel Nuovo (also known as the Maschio Angioino) is next to the cruise port dock. It was originally built by Charles I of Anjou in the 13th century, with many additions since. The entrance is formed by a superb Renaissance arch, with ornate decoration, built in the 15h century for Alfonso I of Aragon. The castle now houses the city's art collection with many paintings depicting the rich history of Naples. There's an expansive view from the Castle's terrace overlooking the city, the port and Mount Vesuvius. 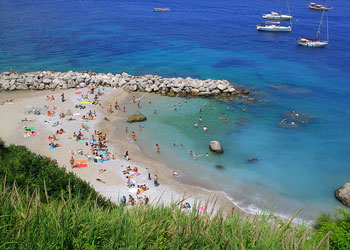 Fast ferries depart from the ferry terminal (positioned just next to the cruise pier) bound for the beautiful island of Capri (the voyage takes about 45 minutes). This lovely (but pebbly) beach is a short stroll from the pier in Capri. After taking a dip, you can investigate charming Capri town. There's a funicular that takes you up the hill to the quaint upper town, which is very touristy, and chock full of shops, restaurants and bars.