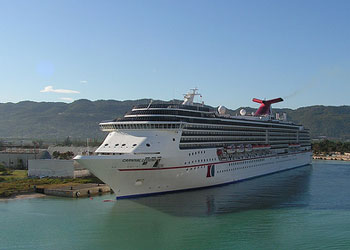 Carnival Conquest docking at Montego Bay. Cruise ships dock a mile southwest of Montego Bay town at the Freeport terminal. It's a five-minute, fixed-rate cab ride into Montego Bay from the cruise terminal. 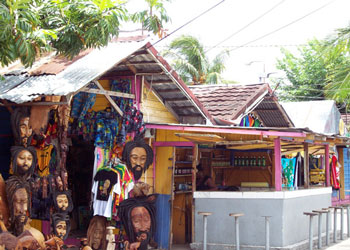 The colorful Montego Bay Craft Market (or Harbour Street Craft Market) is the perfect place to find something to remind you of your time in Jamaica. There’s lots of things to buy, like wooden carvings, straw hats and baskets, beads, T-shirts, wall hangings and reggae music. The market is on the coastal side of the center of Montego Bay town, just before the start of Gloucester Avenue. 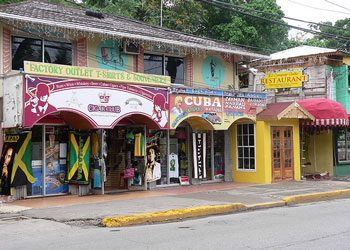 The Hip Strip (officially called Gloucester Avenue) is Montego Bay’s busiest tourist street. It’s home to a wide range of shops, restaurants, bars and clubs, including the popular Margaritavillle. On the coastal side of Gloucester Avenue lie MoBay’s beaches called, starting from the south, Dump Up, Walter Fletcher, Old Hospital, then past the bend in the road Doctor’s Cave and Cornwall. 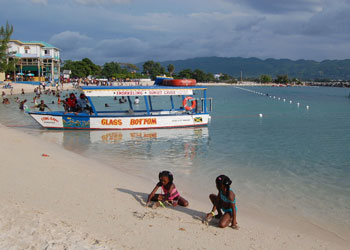 The lively Aquasol Water Theme Park is located on Walter Fletcher beach. Choose from a number of activities including water sports, glass bottom boat rides, a go-cart track, tennis and basketball. The friendly bar serves a big selection of drinks and pumps out a selection of reggae beats. There’s a small charge to enter the park. The parsimonious may prefer the neighboring free beaches, Dump Up to the south or Old Hospital to the north. 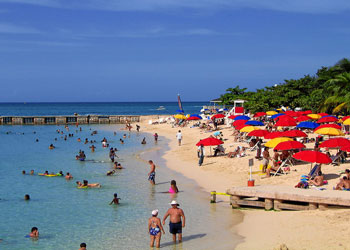 The quarter-of-a-mile long Doctor’s Cave Beach is the most popular tourist beach in Montego Bay, and can become very crowded. But the sands are fine and white, sloping gently into the turquoise blue Caribbean sea. The swimming and snorkeling are both excellent in the warm clear waters. There are lots of amenities available like a beach bar, showers, restrooms, sunchairs/umbrella rental. Though there is a small entrance fee. The beach is 2 miles north of the cruise port. 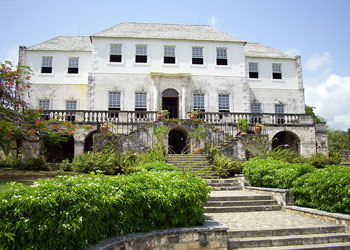 The painstakingly restored Rose Hall is Jamaica’s most celebrated great house. It was constructed in the late 18th century by a rich British planter, and quickly became the center of one of the most prosperous plantations in the area. It’s main claim to fame though, is the (supposed) black activities of Annie Palmer, wife of the builder’s grandnephew, who had been raised by a voodoo practicing Haitian nanny. Legend says she took slaves as lovers, killed them off when she tired of them, and even murdered her husband when he found out. The house is about 10 miles east of Montego Bay.