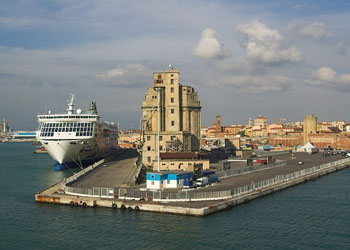 Livorno Cruise Port, Italy. Livorno is a popular cruise center, thanks to its close proximity to Pisa and Florence. Both of these cities are easy to reach on the train - take the shuttle bus from the cruise port to Piazza Grande, followed by the #1 bus to the train station. It's then a 15 minute train journey from Livorno to Pisa, or just over an hour to Florence. 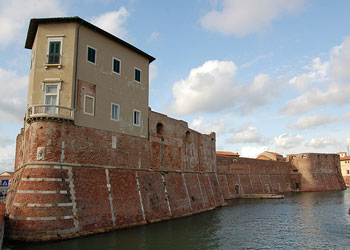 If you have visited Florence before, and would prefer a less frenetic day, there's lots to do in Livorno itself. At the Fortezza Vecchia in the old Mediceo port, it's possible to climb to the top of the Matilde tower, the oldest part of the building. From here there are wonderful views over the town and port. The Medici rulers of Florence, who decided to develop Livorno as a port for their city, commissioned the fort in the early part of the 15th century. Other things to do in Livorno include visiting the central food market, for a real taste of Italy, or taking a boat trip on the town's extensive canal system. 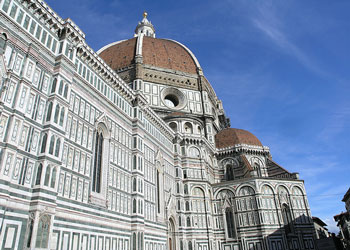 Florence was founded by Julius Caesar on a major road from Rome to France. In the middle ages, Florence became a very wealthy city, as a thriving trade centre for wool and silk. Finance was also big business in Florence - Florentine bankers issued the first monetary bills, and also the well-known florin. The most famous family dynasty of Florence, the Medici, were pre-eminent in the banking world. With their power and money, they commissioned artists, architects and craftsmen from all over Europe to satisfy their taste of style and grandeur. One of the most opulent constructions of the period is the iconic Basilica di Santa Maria del Fiore, or Duomo for short. Its impressively massive octagonal cupola is actually 2 domes, one inside the other. Opposite the Duomo is the Baptistery - its large doors are faced with an intricately detailed bronze relief.

Another must-see in Florence is the Ponte Vecchio over the River Arno. This much-photographed bridge was originally constructed in Roman times. Modern jewelry shops occupy the ancient buildings lining the bridge. 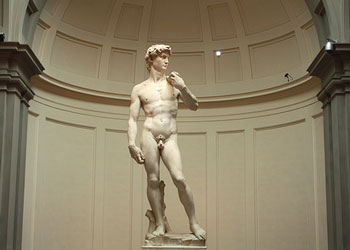 In 1784, the Grand Duke of Tuscany requisitioned a convent and a friary and converted the building into a Gallery for the use of students in the adjacent Accademia delle Belle Arti. Today the Galleria dell'Accademia in Florence is visited by people wanting to see Michelangelo's David, the world's most celebrated sculpture. The museum is also home to five more Michelangelo sculptures - the four unfinished Prisoners and St. Matthew. 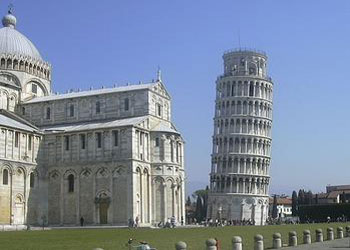 Pisa's famous Leaning Tower was the bell tower for the nextdoor cathedral. Construction began in the late 12th century, and continued for about 200 years. Even before it was completed, it was obvious to the builders that the ground was too soft, and the foundations too shallow, because the tower began to lean. The tower has been closed to visitors for extensive periods in recent history, to allow for stabilisation works, so you might want to check if it's open before going.