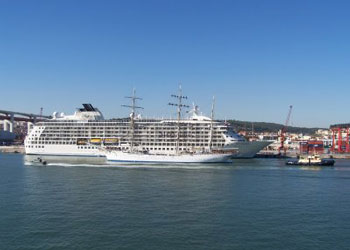 Cruise ship moored at the Rocha Cuise Terminal, Lisbon, Portugal. Cruise ships head up the Tagus estuary, pass under the massive 25 de Abril suspension bridge, then dock at one of three cruise terminals (Alcantara, Rocha Conde de Obidos or Apolonia) on Lisbon’s southern shoreline. For port calls, most cruises offer a shuttle bus service into the nearby Praca do Comercio. 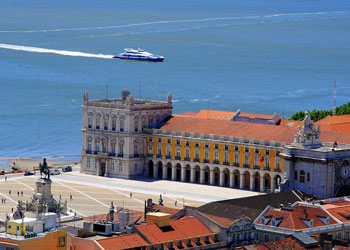 The royal palace stood on the spot occupied by the Praca do Comercio for over two centuries, until it was destroyed by the devastating earthquake of 1755. In the center of the square is a magnificent statue of King Jose I on a horse. On the north side of the square is the famous café, Café Martinho da Arcadia, a favourite of artists and poets for over 300 years. The classical building on the west side of the square houses Lisbon’s tourist information office, a very useful stop before a day’s sightseeing. 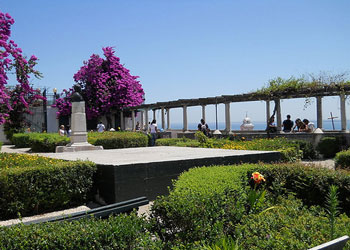 From the Praca do Comercio you can wander up the hill towards St Georges castle. You’ll be passing through the oldest district of Lisbon, the Alfama. Lisbon is famed for its ‘Miradouro’ or lookouts, spots with spectacular views over the city. At the top of R de Augusto Rosa, half-way up the hill, lies the Miradouro de Santa Luzia, one such place. After enjoying views from the terrace, relax a while at the nearby café before continuing your climb to the castle. 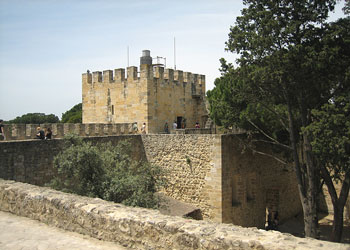 Originally constructed by the Visigoths in the 5th century, St. George’s castle was enlarged by the Moors 400 years later. Today many structures of the castle are missing, due to the destruction caused by several earthquakes. Visitors can walk along the ramparts and climb the towers, or stroll in the gardens to admire the peacocks and ducks. There is also a multimedia exhibition in the museum describing the rich history of the city. 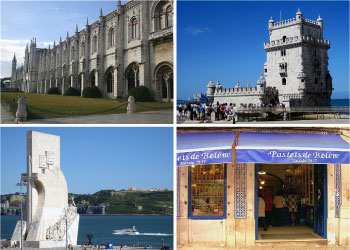 Many tourist’s favorite area in Lisbon is Belem, a historic area with strong associations to Portugal’s golden age of exploration across the Atlantic in the 15th century. 3 must-see attractions are Jeronimos Monastery, a 16th century building which commemorates Vasco Da Gama's historic voyage, the Torre de Belem, constructed around the same time by King John 1 to defend Lisbon, and the Discovery Monument, a very impressive 1940s sculpture celebrating this amazing era. Also be sure to call at the Pasteis de Belem to sample the most famous custard pies in Portugal. Belem is an easy tram ride from the center of Lisbon. 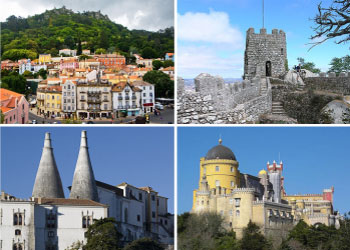 Sintra is a magnificent outing from Lisbon. The town boasts a castle and two palaces set on steep verdant hillsides with glorious views all around. Visit the Castle of the Moors, originally built in the 12th century by the Christians as they reconquered Portugal, the Royal Palace , built in the 14th century as a summer retreat for Portuguese royalty, and the Palace of Pena, an 18th century fairy-tale inspired Neuschwanstein-like creation. It’s a 15 minute train ride from Lisbon to Sintra. At Sintra, cheap one-day bus tickets are available which allow you to ride the circular bus, with stops at all these attractions.