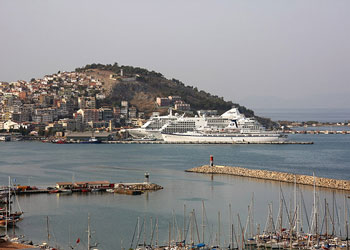 Cruise ships in harbor at Kusadasi, Turkey. Kusadasi is a small resort town hugging the shoreline of a beautiful Mediterranean bay. The town offers extensive shopping, pleasant beaches and easy access to some of the most impressive ruins in the world - Ephesus. 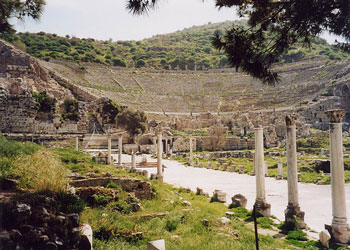 During the period of the Roman Empire, the Greek port of Ephesus became the largest city in Asia Minor, and is today the Mediterranean’s best-preserved classical city. Your tour starts through the magnificent Magnesian Gate, then you'll discover the huge Forum, the impressive Odeon, the two-tiered Library of Celsus, the excellently engineered Thermal Baths of Scolastika and the huge Great Theatre which could seat a staggering 24000 people. Ephesus is about 10 miles from Kusadasi, just before the town of Selcuk, and is best reached via a ship excursion. 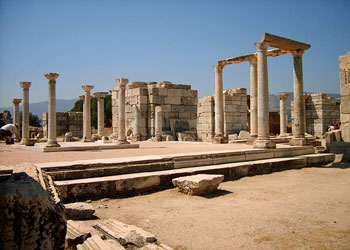 The Basilica of St John, near ancient Ephesus, was built over the apostle's grave in the 6th century by Emperor Justinian. Here St John spent the last years of his life writing his gospel. Unfortunately, today the church lies mostly in ruins.


Meryemana, the House of the Virgin Mary, 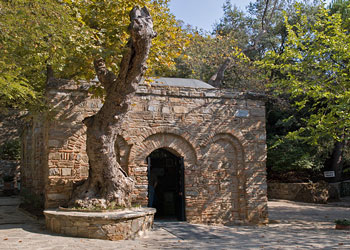 Meryemana is said to be where St John took the mother of Jesus after the crucifixion. Situated in a small valley, the humble chapel is positioned on the site of the small house where Mary is believed to have lived. Meryemana is about 5 miles past Selcuk along a winding valley road. 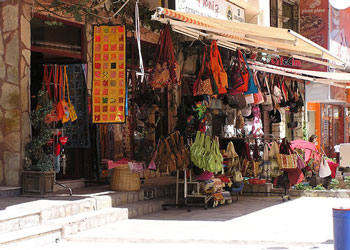 There are lots of shops in Kusadasi. You'll find everything from shoes, bags and belts to pots, carpets, watches and jewellery. Including a lot of 'genuine original fakes' according to the signage. But be prepared for some fierce selling techniques. 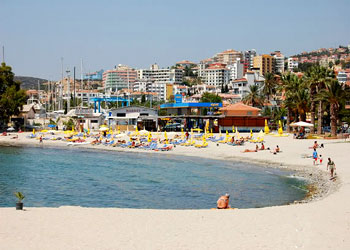 City beach is in the center of Kusadasi, and is a short cab ride or walk from the cruise port. With a lovely view towards Pigeon Island and the the reassuring sight of your ship docked safely in port, it is a great place to relax and enjoy life. There are sun beds, beach parasols, and a beach cafe. However if you plan to spend most of the day at the beach, a better option is Ladies beach, a lovely 1km stretch of sand which is a 5 minute bus/cab ride from town (nowadays ok for both sexes!)