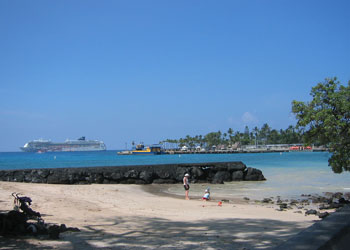 Cruise ship near the Kailua-Kona coast, Hawaii. Cruise ships anchor off Kailua-Kona and tender passengers into a small pier, next to downtown. 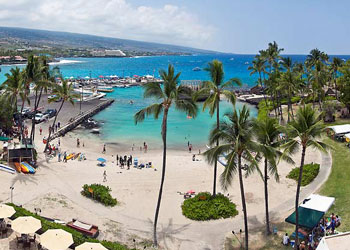 Kamakahonu Beach, beside Kailua pier, is the only beach in Kailua. Calm and clear waters lap up a small crescent of fine white sand. The beach is great for swimming and snorkeling. Facilities available include canoe and snorkel rental, showers and restrooms. You can also visit Ahu'ena Heiau, King Kamehameha’s personal temple, which sits on a small rock promontory next to the beach. 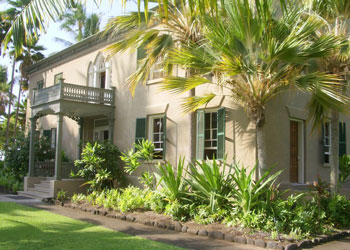 Once a summer vacation home for Hawaiian kings and queens, today Hulihe‘e Palace is a museum presenting 19th century items from the times of King Kalākaua and Queen Kapi‘olani. The palace is maintained by the Daughters of Hawaii. Hulihe‘e Palace is located on Ali‘i Drive just a 5 minute walk east from the tender pier. 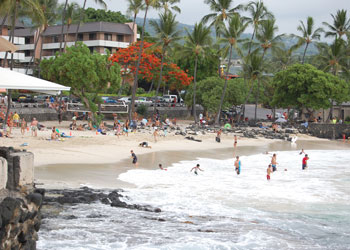 Magic Sands Beach(or White Sands beach or Disappearing beach), is a beautiful white sand beach very popular with boogie-board surfers. Amenities include lifeguard, showers and restroom. Be warned though that the beach, as its alternative name suggests, may disappear during winter months. The beach is about 4 miles south of Kailua along Ali’I Drive, and travel options include hiring a taxi, renting a car, or you can take the Keauhou Honu Express Shuttle from Kailua pier to the beach, a ride of about 20 minutes. 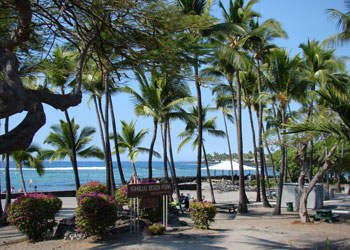 Kahalu’u Beach Park boasts a lovely black sand beach comprised of lava mixed with sand. It’s a popular snorkeling destination, with a myriad of sea life to spot in the clear ocean waters. Facilities include restrooms, showers, and snorkel rental. The beach is about 6 miles south of Kailua along Ali’I Drive, and travel options include a cab ride, or renting a car, or you can take the Keauhou Honu Express Shuttle from Kailua pier to Keauhou beach resort, a journey of about half an hour. 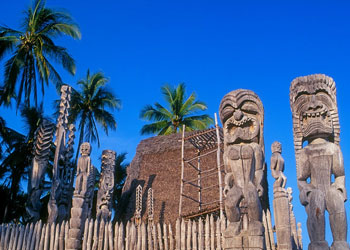 Pu'uhonua o Honaunau or Place of Refuge has a fascinating history. Up until the 19th century, a Hawaiian who broke Kapu, or sacred laws, could escape death by fleeing his pursuers and making it to the Pu’uhonua. Once at this sacred refuge a ceremony of forgiveness would be held and the law breaker could then return to his home. Pu'uhonua o Honaunau is about 15 miles down the coast from Kailua, and is a popular ship’s tour.