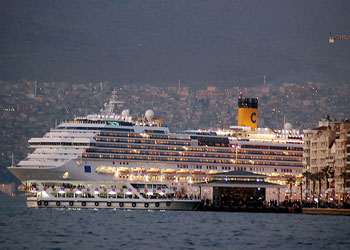 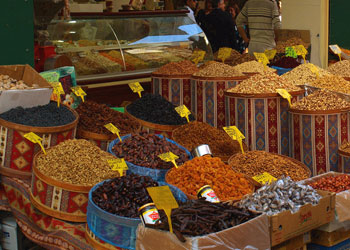 Kemeralti Bazaar is the main bazaar in Izmir and is a must visit just to experience the Aladdin-like feel. Though not as large or overwhelming as Istanbul’s Grand Bazaar, you can easily get lost as you stroll around the many varied and colorful stalls. There’s nearly anything you could think of to buy, but perhaps best value are pottery, jewelry, carpets and shoes. Stop at the café in the courtyard of the caravanserai for a cup of apple tea, a welcome break from all that hectic bargaining! The Bazaar is about two miles south west of the cruise ship docks. 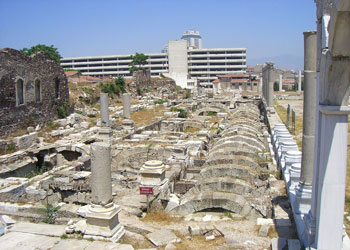 Tucked away in the bustling streets of Izmir the Agora is a truly impressive archaeological site. A large colonnade of Corinthian columns, several vaulted chambers and stone arches give a good impression of what a Roman Bazaar would have been like (just a few hundred yards from the Ottoman Kemeralti Bazaar). Many of the important artifacts from the Agora are now held in the Archaeological Museum, near Konak Square. 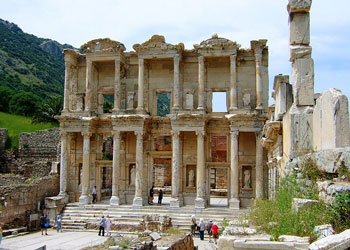 During the time of the Roman Empire, the Greek port of Ephesus was the foremost city in Asia Minor, and remains today the Mediterranean’s most intact classical-era city. See the magnificent Magnesian Gate, the huge Forum, the impressive Odeon, the carefully engineered Thermal Baths of Scolastika, the two-tiered Library of Celsus, and the enormous Great Theatre which could seat an amazing 23000 people. Ephesus is about 20 miles south-east from Izmir, just past the town of Selcuk. 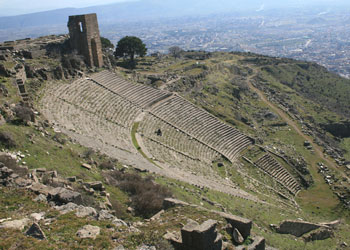 Built on a tall hill rising 1,000 feet above the surrounding valleys, Pergamum was an important city in Greek times. Tour the Acropolis, the Temple of Zeus, the spectacularly located amphitheater, the Agora, and the Temple of Trajan. Pergamum is about 50 miles north of Izmir. 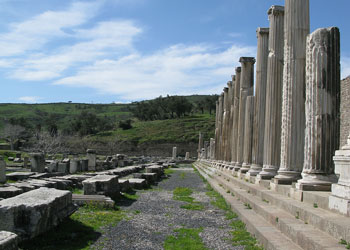 Aesklepion was one of the first medical centers in the world. Here Galen, the great physician, set out a series of basic principles, followed by doctors ever since. Aesklepion is about a mile away from Pergamum, across the town of Bergama.