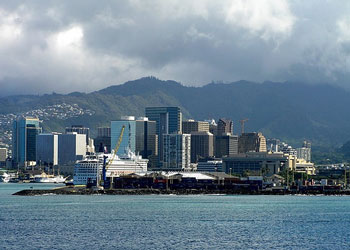 The harbor, Honolulu, Oahu. Cruise ships dock by Pier 10/11 adjacent to Aloha Tower near downtown, or by Pier 2 at Fort Armstrong. 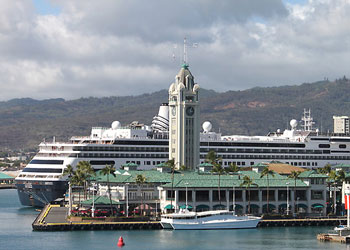 The Aloha Tower Marketplace offers a range of unique and attractive shops, waterfront eateries, and live music. The top floor observation deck of the tower boasts a beautiful view across Honolulu harbor. The marketplace is also the home of the Falls of Clyde sailing ship and the Hawaii Maritime center, both located at pier 7. 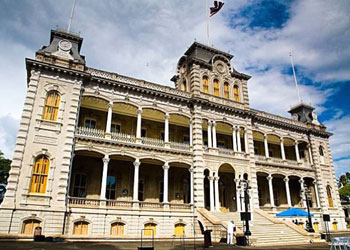 The magnificent Iolani Palace was constructed in 1882 for King Kalākaua, who lived in the palace until his death in 1891. His sister Lili`uokalani succeeded him to the throne but she was overthrown just two years later by a group of businessmen of American descent. The Queen suffered imprisonment in an upstairs room in the palace. The building has now been carefully restored to its former magnificence, and offers a fascinating insight into the final years of the Hawaiian monarchy. Iolani Palace is a short inland walk from the cruise ship dock. 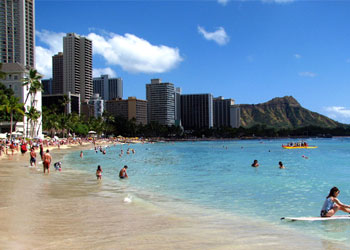 Waikiki Beach is one of the most famous beaches in the world. The two-mile stretch of fine white sand is located at the south-eastern end of Honolulu. Mostly it’s backed by tall hotels and condo blocks, but towards the southern end, the hotels give way to the green and lush Kapiolani Park. There are lots of water sports on offer – swimming, snorkeling, boogie-boarding and surfing – all under the watchful eye of the year-round lifeguard provision. Or try a unique Waikiki tradition, the outrigger canoe ride. Bus #8, #19 or #20 or #42 will take you from downtown to Waikiki. 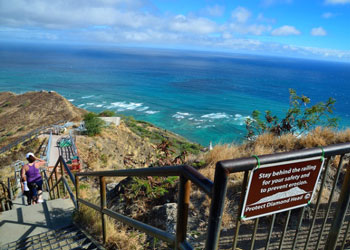 The path to the summit of Diamond Head (Le'ahi) was constructed in 1908 as part of O'ahu's coastal protection system. It’s a steep 1 mile long hike from the start of the trail to the summit of the volcano, but you are rewarded with fantastic views of the shoreline from Koko Head to Wai'anae. Diamond Head is beyond the southern end of Waikiki beach, and the easiest way to get to the trailhead is by cab. 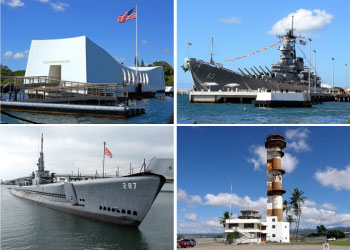 In the early hours of December 7th, 1941, the Japanese launched their attack on Pearl Harbor starting the Pacific War. Today you can visit the USS Arizona Memorial, respecting the sailors who perished when their ship was sunk. Your trip can also include the USS Missouri, a WWII battleship, USS Bowfin, a WWII submarine, and the Pacific Aviation Museum, which preserves the memories of the air battles over the Pacific during WWII. Note that tickets for the USS Arizona Memorial are limited, so are best booked in advance on-line. Pearl Harbor is 5 miles west of downtown Honolulu, and can be reached by cab or bus routes #20 or #42.