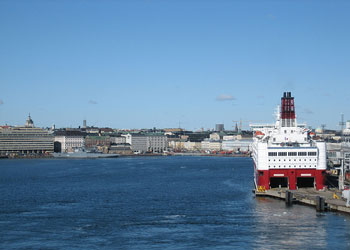 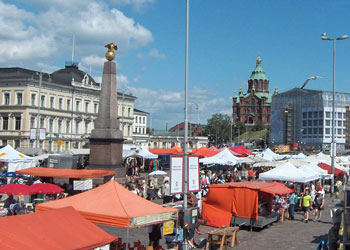 Market Square is Helsinki’s most famous market. The bustling stalls sell a wide range of goods, from tasty Finnish seafood to kitsch local souvenirs (furs, carved wood, liquorice candles, carved reindeer bone and hunter knives). There are lots of snackbars ideal for a quick bite to eat during a break. Market Square is conveniently located at the apex of South Harbour. 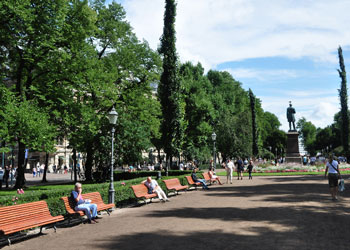 Leading off west from Market Square is the Esplanade, a pretty boulevard-style urban park On a warm summer day settle down on the grass to enjoy the sunshine and perhaps watch some lively street entertainment. The park is sandwiched between two of the poshest streets in Helsinki, both of which are lined with expensive and exclusive stores. One of these is the legendary Marimekko design shop, well worth a visit. 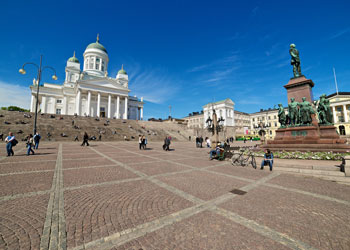 Just above Market Square stands imposing Senate Square. Around the square sit three impressive buildings; Helsinki Cathedral, the Government Palace and the University of Helsinki. All three were designed by the distinguished architect Carl Ludvig Engel in the 19th century. Sit on the Cathedral’s steps and enjoy lovely views over the city. 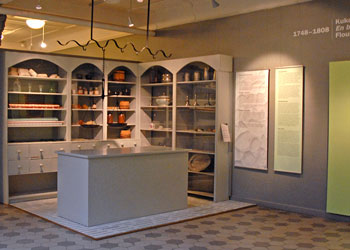 The comprehensive exhibition at the Helsinki City Museum chronicles the rich history of the city. The displays are split into three sections, the Swedish era, the Russian era, and the era of Finnish independence. The Museum is located between Market Square and Senate Square. 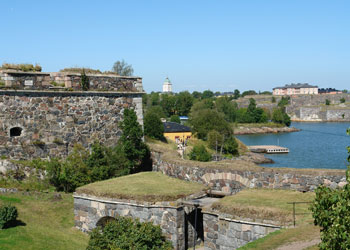 A frequent ferry service runs between the dock next to Market Square, and the sprawling Suomenlinna Sea Fortress, built on a small offshore island. The ferry ride takes a quick 15 minutes and is very picturesque. The fortress was built in the 1700s when the Swedish ruled Finland, then was further expanded in the 19th century under Russion rule. See massive walls, ramparts, cannon emplacements, and labyrinthine tunnel networks. The top of the fortress offers stunning panoramic views across the Baltic, the Gulf of Finland and the city of Helsinki.