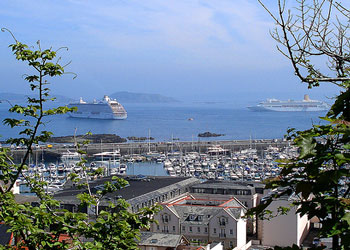 Looking over St Peter Port toward Sark. Smaller cruise ships dock in the harbor at St Peter Port (or ‘town’ in the local vernacular), larger ships anchor offshore and tender their passengers into Albert pier. 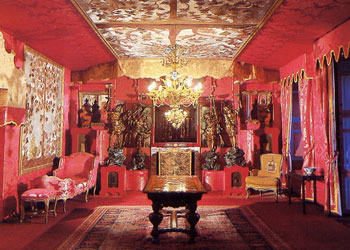 Victor Hugo lived in Hauteville House from 1856 to 1870. In 1927 the house was donated to the City of Paris by the author’s descendants, and ever since the house has been managed by the city. The interior is perfectly preserved, and every ceiling, wall and floor remains as designed and decorated by Victor Hugo himself. Visits are only available via guided tours, and it is best to reserve your place by email or phone. Hauteville House is located a short walk from the tender pier, up Cornet Street.

Castle Cornet stands guard at the southern mouth of the harbor. Its history can be traced back as far as the 13th century, when King John constructed the fort to defend the anchorage from the French. The castle is now home to several museums, including the Castle Cornet history museum, the Maritime museum, the 201 Squadron RAF museum, and two Militia museums. You can walk around the battlements, and enjoy the panoramic view - one way over the sea towards Sark, the other towards pretty St Peter Port. Castle Cornet is a 15 minute walk around the harbor from the tender pier.

The La Valette German Underground Museum chronicles Guernsey´s part in World War I, the German Occupation in World War II and the history of the island´s Militia. The museum has an atmospheric setting, housed in underground tunnels built by German forces in WWII as a fuel bunker for U-Boats. The Museum is just south of the harbor. 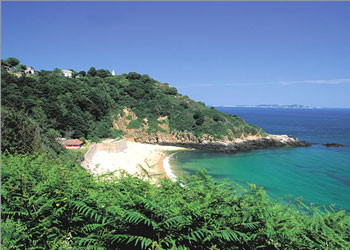 Fermain Bay is a small cove - largely sandy but a little pebbly at low tide. It’s the perfect place for relaxing in the sun, or for the brave, a swim in the chill water. Facilities include a beachfront cafe/restaurant and restrooms. The best way to reach Fermain Bay is by the cliff top path south from St Peter Port, an interesting 1 ½ mile walk taking no more than an hour. Your journey will take you past the La Vallette bathing pools, the La Vallette Underground Military Museum, the Guernsey Aquarium, Clarence Battery, Fort George, and Soldiers Bay. 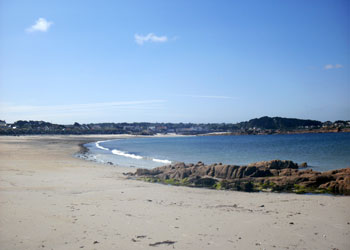 Vazon Bay is a gorgeous two mile wide sweep of white sand on the west coast of the island. The beach is Blue Flag standard, so excellent for paddling/swimming. There are cafes and restrooms at either end. It’s also worth exploring Fort Hommet and the restored German bunker, both at the north end of the bay. Bus route 7 (clockwise)/route 7A (anticlockwise) connect Town with Vazon Bay.