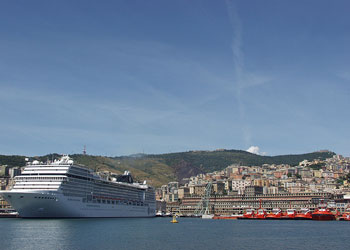 Cruise ship berthed at Genoa, Italy. Cruise ships dock at the Ponte dei Mille, Ponte Andrea Doria, and Ponte Parodi quays in the horseshoe-shaped Passenger Terminal dock, about a mile from the center of Genoa. 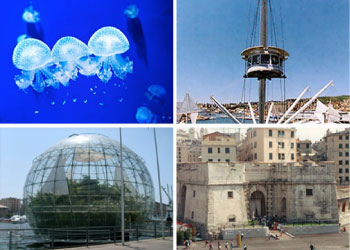 Porto Antico (translated as old Port) is an attractive pedestrianized quayside area just a quarter of a mile from the Passenger Terminal dock. Visit the Aquarium, the biggest in Europe, to learn about the fascinating life under the Mediterranean sea. Ascend the Bigo, a unique skylift giving wonderful views over the dock and city. Travel to the tropics at the Biosphere, an dome-shaped glass house housing a miniature jungle ecosystem. Or tour Porta Siberia, a Renaissance era fort now housing the Luzzati museum, celebrating the work of the famous short-film maker. 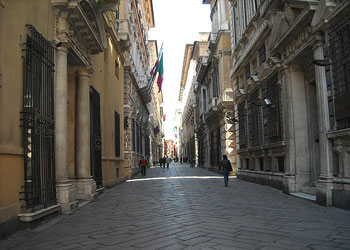 Via Garibaldi is at the center of Caruggi, Genoa’s old quarter. It’s a narrow stone-flagged street, lined by a series of magnificent palaces. Three of the Palaces are art galleries; Palazzo Rosso, Palazzo Bianco and Palazzo Tursi. Palazzo Rosso combines opulently furnished rooms with frescoed interiors and an amazing collection of paintings, including works by Titian, Veronese, Tintoretto and Caravaggio. Palazzo Bianco also features an impressive collection of art. Palazzo Tursi is best know for displaying Paganini's fabulous Guarnieri violin. 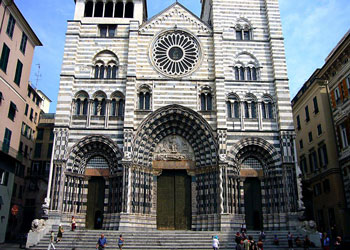 The Cathedral of San Lorenzo was constructed in the Romanesque style in the late 12th century, and is home to St John the Baptist’s ashes. Note the (replica of the) unexploded bomb from World War II by the confessionals. Also worth a visit is the Museum, with its medieval silver and gold treasures. 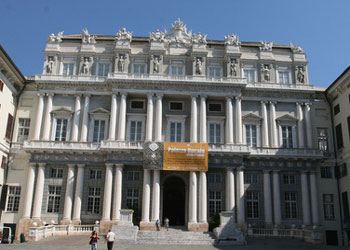 The Palazzo Ducale or Doge’s palace, was originally built in the 13th century, as a residence for the Doge of Genoa - though a complete rebuild was necessary in the 18th century due to fire. The splendid main halls on the ground floor hold a wide variety of temporary exhibitions. 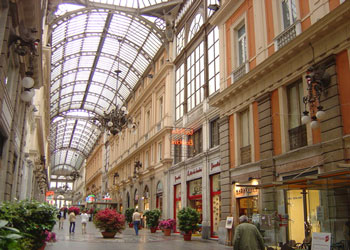 Running between Piazza Corvetto and and the Piazza De Ferrari, Galleria Mazzini is an impressive shopping arcade dating from the 19th century. Enjoy shopping at the fashionable stores, then stopping for refreshment at one of the trendy cafes.