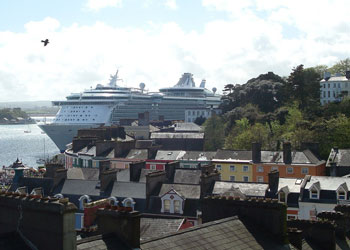 Independence Of The Seas moored at Cobh, Cork, Ireland. Most cruise ships dock at the Port of Cork’s Cobh (pronounced ‘Cove’) cruise berth. Cork is a quick 25 minute train journey from Cobh. Occasionally ships dock at the Ringaskiddy deep water berth, on the other side of Cork harbor from Cobh. 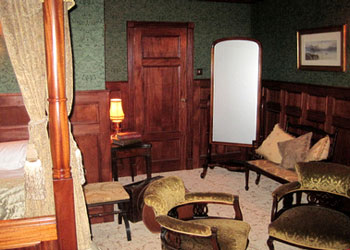 When your cruise ship docks at Cobh, you will be following in the steps of the Titanic, which called at Cobh (or as it was then called Queenstown) on its ill-fated voyage of 1912. The Titanic Experience, located in the original offices of The White Star Line invites you to imagine being one of the 123 passengers who joined the liner in Queenstown. Next to the Titanic Experience stands the Tregan Craft Center, an ideal place to pick up a souvenir of Ireland. 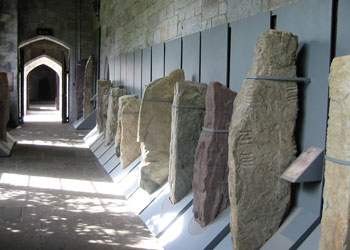 Start your visit to the University College Cork by popping into UCC’s Visitor Center to collect a leaflet or audio guide. This will detail the many things to see in UCC including the Glucksman Gallery (which hosts an exciting collection of modern art), the Honan Chapel (inspired by Irish Arts and Crafts movement of the early 1900s), the Ogham Stones (burial stones from prehistory inscribed with an early pictorial form of the Irish language), and the Crawford Observatory (with telescopes dating from 1880). 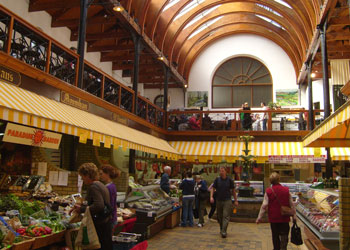 The English Market is so called because it was founded in 1788 by the city’s then Protestant council. The bustling market sells a whole range of local and distinctive produce, including buttered eggs and the Cork delicacy? tripe and drisheen (or ‘Packet and Tripe’). To try this dish for yourself, call in at one of the nearby cafes - it’s a favorite on the menu. 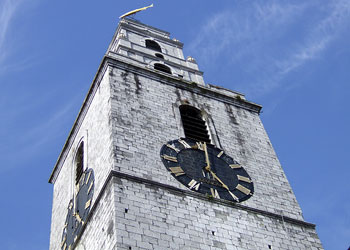 If you fancy your hand at campanology, you can ring the famous 18th century Shandon Bells at St Anne’s Church. Also check out the slightly suspect mechanism of the church’s clock, the ‘Four Faced Liar’, so called because each side of the tower would show a different time! 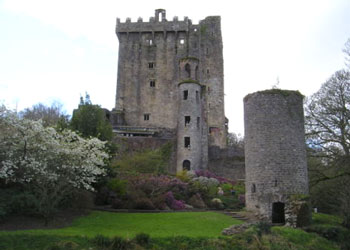 Blarney Castle was built by the powerful MacCarthy clan around the year 1446. Tradition has it that Robert the Bruce of Scotland sent the Blarney stone (a piece of the Scottish ‘stone of destiny’ used in the crowning of monarchs) to the castle to help secure his brother Edward as King of Ireland. Later during the reign of Queen Elizabeth I the then ruler of Blarney castle, Dermot McCarthy, was ordered to hand the castle over to the Queen. Dermot delayed proceedings with a whole series of obtuse yet plausible excuses. So came the meaning of blarney as ‘gift of the gab’. But how the tradition of kissing the Blarney stone to bestow this power of eloquence came to be nobody knows. Today visitors can climb the narrow corridors of the castle and adopt a contorted position to kiss the fabled stone. Blarney Castle is about 6 miles north west of Cork and is a popular coach excursion.