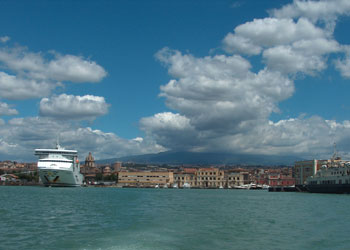 The harbor at Catania, Sicily. Cruise ships dock at the cruise terminal on the projecting central pier (Sporgente Centrale). 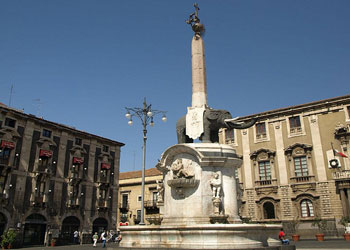 Piazza Duomo is a good place to start your whistle stop tour of Catania. The cathedral overlooking the square may be magnificent, but it is not photographed as much as ‘U Liotru’, a slightly incongruous statue of an elephant carrying an obelisk, which stands at the piazza's center. The monument was constructed in 1735 by the sculptor Giovanni Battista Vaccarini, using black volcanic basalt for the elephant, and marble for the obelisk. Many think the origins of the city’s emblem lie in the 3 foot high Mediterranean pygmy elephant that used to inhabit Sicily in prehistoric times. Piazza Duomo is about a mile north of the cruise dock. 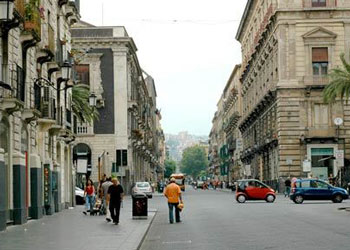 Running north from Piazza Duomo, Via Etnea is Catania’s most celebrated street. It’s lined a by series of historic baroque buildings, many which today house interesting stores, boutiques, and snack bars. Stop at an ice-cream parlour for a taste of Sicily’s granita, a mouth-watering crushed ice dessert. Also take a short detour at Piazza Stesicoro to see the remains of a Greek amphitheatre, hemmed in between two streets. 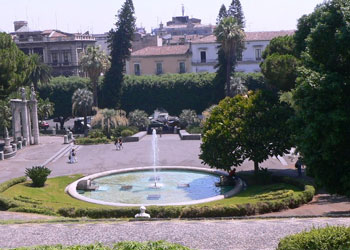 Continuing along Via Etnea for about ¾ of a mile north of Piazza Duomo takes you to the main entrance to Villa Bellina, one of the most beautiful public gardens in Europe. See tall trees, verdant plants and colorful flowers in a landscape of bridges, borders, statues and fountains. 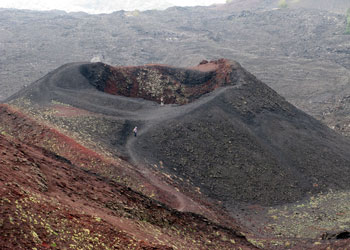 Catania is built on the foot slopes of towering Mount Etna, one of the most active volcanoes in the world. Ship excursions typically involve taking a 30 mile winding bus ride to Rifugio Sapienza, on the northern side of the peak. Various expeditions are available from the refuge, including a hike around the impressive Silvestri craters. 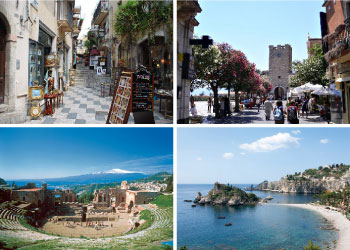 The beautiful town of Taormina, perched high above the Mediterranean sea, is located equidistant from Catania and Messinia, and is a popular excursion from both. Stroll along picturesque Corso Umberto, enjoy a coffee in bustling Piazza IX Aprile, marvel at the spectacular Greek amphitheater, or swim in crystal clear waters off Isola Bella beach.