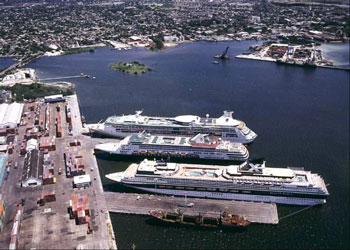 An aerial view of the cruise ship berths at the Port of Cartagena, Colombia. The port is less than 2 miles from the historic walled old city. 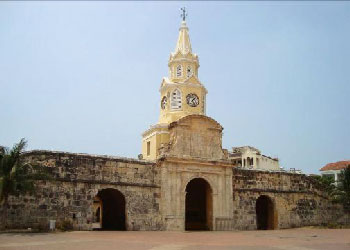 The Clock Tower Gate (or Puerta de Reloj) is the easiest place to access the Old City (which goes by several names including La Ciudad Amurallada, Walled City, Centro Historico, El Centro and Centro) from the direction of the cruise port. The tower stands tall above the city’s rooftops, and its distinctive shape makes a good point of reference. As you walk through the wide gateway, and past numerous stalls, you’ll arrive at the Plaza de los Coches (or Carriage Square), in past times the site of a slave market. 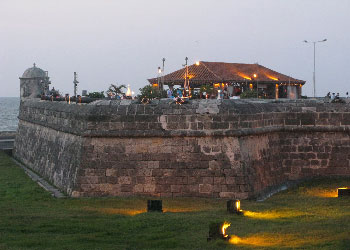 If you head left after leaving Clock Tower gate there are several places to access the old city wall via ramps and stairs. You can stroll along the wall as it circles El Centro, offering stunning views of the turquoise-blue Caribbean on one side, and the old city on the other. Several gun emplacements and watchtowers add to the sense of history. The fit can continue for over one and a half miles, eventually reaching the end of the walking part of the wall, at the statue of India Catalina, which stands at the center of a small roundabout. 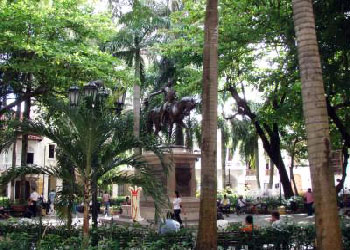 A magnificent statue of Simon Bolivar stands at the middle of the Plaza Bolivar. He was a major figure in the liberation of Colombia from Spanish rule in the early 19th century. The Plaza is part square and part park, and the large trees give welcome shade on a hot day. Close to the square stands Cartagena’s ancient cathedral, and also the Palace of the Inquisition, now a gruesome museum. 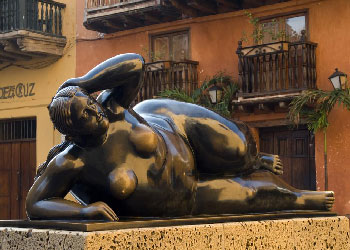 The Plaza Stanto Domingo is an attractive square at the heart of El Centro. On one side stands the gorgeous Santo Domingo church, and in one corner sits the eye-catching bronze sculpture of a very voluptuous ‘Gertrudis’. The center of the Plaza offers lots of café/restaurant seating, making a very pleasant lunchtime stop. 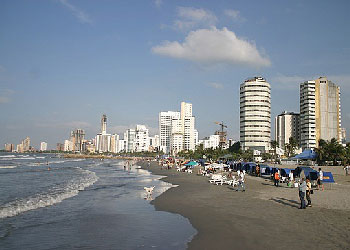 Boca Grande is the ‘L’ shaped piece of land that connected to the southern end of El Centro. It’s very popular with vacationers, and is a busy mixture of tall hotels, condos, restaurants, bars and shops. (You’ll get a good view of the area from the ship as you sail into Cartagena bay). Boca Grande beach is friendly and lively, and concessions rent out beach loungers and umbrellas. Boca Grande is a mile to the south of El Centro.