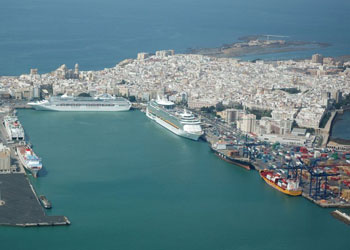 The Port and Old City of Cadiz, Spain 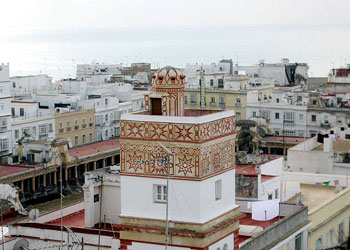 In the 18th century, the skyline of Cadiz was dotted with over a 160 towers, used by merchants to check the movements of ships out to sea. In the centre of Cadiz you can visit the the Torre Tavira, the highest of these watchtowers. The tower has a 'camera obscura', which displays a fascinating 360degree projection of the city. The tower is about half a mile south-west from the cruise ship dock. 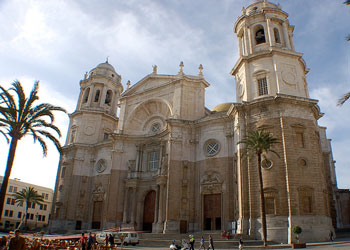 The most impressive building in the old city is the Cathedral de Santa Cruz de Cadiz, started in the 18th century, and completed a hundred years later. There's an impressive display of treasures, including gold and silver items brought back from the New World during the Age of Discovery. The cathedral is a short walk south from the cruise dock. 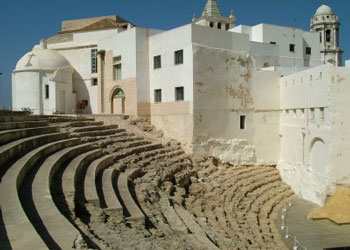 Discovered as recently in 1980, excavation revealed Cadiz's Roman Theater, the second largest Roman theatre in the world, only beaten by the one at Pompeii. The find confirmed the importance of the city in Roman times (then called Gades), when it was a major center for trade and commerce. Located a stone's throw to the east of the Cathedral. 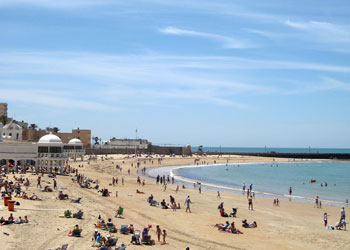 At the western side of the Cadiz city peninsula lies La Caleta beach, a large stretch of golden sand. The beach sits in a wide bay, protected by the San Sebastian isthmus, and makes a great place to lounge away the day. The beach is situated about a mile from the cruise port. 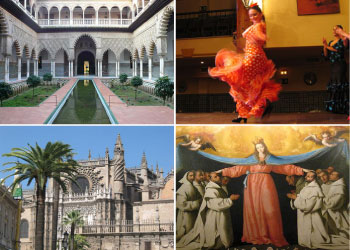 Many passengers arriving at Cadiz board a coach (or alternatively a train) and head straight out to Seville, famous as the birthplace of Flamenco. The city lies some 60 miles inland of Cadiz, and the tourist can see the Moorish palace of the Alcazar, watch a flamenco show in the historic Barrio Santa Cruz district, tour Seville's majestic cathedral, and marvel at the super collection of works by Spanish masters at the Museo de Bellas Artes.