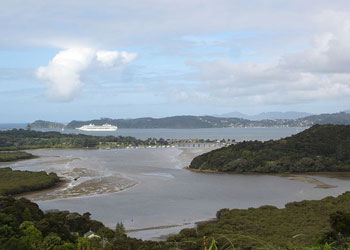 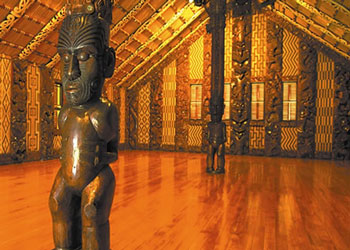 The Waitangi Treaty Grounds have an important place at the heart of today’s New Zealand, as it was here that the Treaty of Waitangi was signed, a document which offered the prospect of peace between the Maori and the colonists. See the Treaty House, the Meeting House, the War Canoe, then walk from Hobson’s beach via the Nias Track to the Flagstaff. 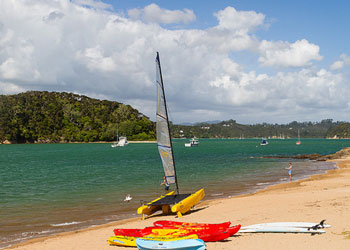 Paihia Beach is a long stretch of golden sand located just south east of the ferry pier. There are lots of facilities including restrooms, a snack bar, showers and a large rental concession offering kayak/bike/snorkel gear/paddle-board hire. 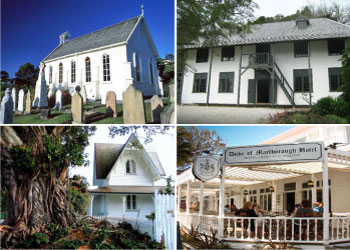 A Walking Tour of Russell is a great way to experience this vibrant and historical town (it was even capital city of the country for a year!). Your circuit could include Christchurch (1835), the oldest existing church in NZ, the Pompallier Mission (1841), a Roman Catholic mission, the Old Customs House (1870), a pointer to just how much cargo was shipped through Russell in the early days, and the Duke of Marlborough (1827), the oldest pub in NZ. Also recommended is a brief stop at the Russell Museum, a treasure trove of Maori and early Colonial history. 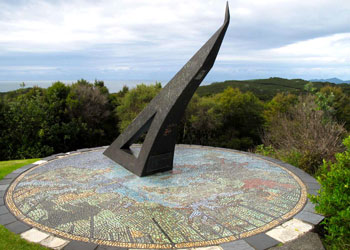 The Flagstaff Hill Track is a short ¾ mile path which leads up from Russell to Flagstaff Hill. This location was chosen by early colonialists for a tall flag pole, flying the Union Jack. The flag though was cut down four times by the Maori leader Hone Heke, each time after a dispute between the Maoris and the newcomers. At low tide you can access the trail from the northern end of Kororareka Bay, at high tide you’ll have to start from Wellington Street. The attractive trail takes you through regenerating coastal scrub to the centennial sundial at the hill’s summit. The viewpoint offers a magnificent 360 degree panorama of the Bay of Islands.


The Hole in the Rock (Paihia/Russell) 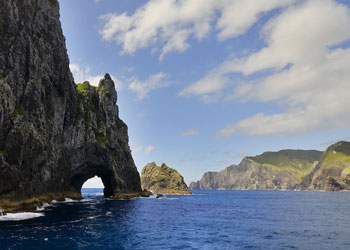 The most popular boat excursion from Paihia/Russell is a voyage to (as possibly through) the Hole in the Rock at Motukokao island, a round trip of about 30 miles (48km). You’ll also see numerous other Bay of Islands attractions, including Urupukapuka Island and the Cape Brett Peninsula plus a myriad of sea life including dolphins and sometimes whales.

©CruiseTimetables.com
Cruises To Bay of Islands