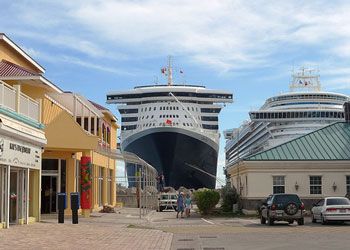 Queen Mary 2 at Basseterre, St Kitts. Ships dock at Port Zante, a cruise ship pier and marina on the southern side of Basseterre. The terminal area has restaurants, shops and cafes, and is about a 15-minute stroll into downtown.


Independence Square and The Circus 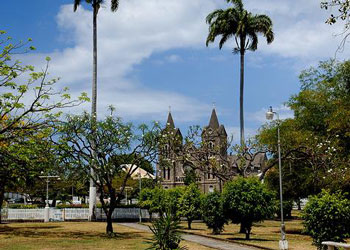 To find Independence Square leave Port Zante, cross Bay Road, and continue straight on for a couple of blocks. The square, originally built as a slave market in 1790, is today a large attractive city park, with tall trees providing shade to the paths. Next to the Square sits The Circus, a small roundabout with a striking cast iron tower which is topped by a quirky clock and statue. Adjacent to the Circus stands a shopping mall set in a leafy courtyard. It makes a convenient place to visit to pick up anything from souvenirs and beach wraps to rasta hats and sandals. 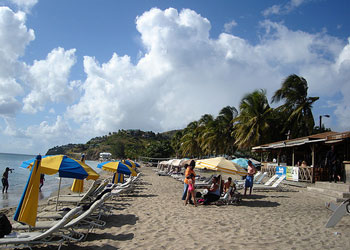 Pack your bag with a swimming outfit, sun screen and sun glasses and head for South Frigate Bay. Pretty one-mile long South Frigate beach is the action beach strip of the island. There's lots of facilities available, including umbrella and sunbed hire, and watersports rentals. The beach is lined with several bars that serve drinks and food, and also sell a range of island souvenirs. But there's more, as on this excursion you get two beaches for the price of one! A short walk across the island to the north shore takes you to quieter North Frigate beach, ideal for strolling and relaxing, or for the more energetic windsurfing and surfing. Located one mile east of Basseterre. 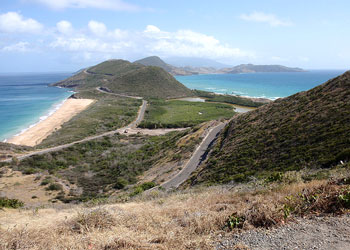 Frigate's quieter neighbor, Friars, also possesses a ying and yang of beaches, North Friars Beach and South Friars Beach. On the southern, Caribbean Sea side, South Friars beach is a fabulous picture-perfect tropical beach. The turquoise water is calm and excellent for a gentle swim. There's a beach bar serving food and drinks. Alternatively, if you're a strong swimmer, and would like the excitement of some heavy Atlantic surf, head over to North Friars beach, just a stone's throw away. Situated two miles east of Basseterre. 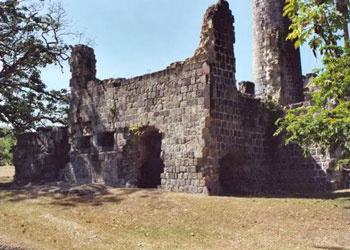 In the 1640’s, Wingfield Estate developed into a major sugar plantation. Today it remains one of the better preserved on the island, and a visit provides a unique insight into a slave-worked plantation of the 17th century. Interestingly it was one of the few plantations on the island to use water to power sugarcane mashing, and you can see the ruins of the aqueduct. At adjacent Romney Manor you'll find five acres of botanical gardens, and the famous Caribelle Batik who make and sell a lovely range of colorful batiks. The Wingfield Estate overlooks the southwest coast of St Kitts, around 6 miles away from Basseterre. 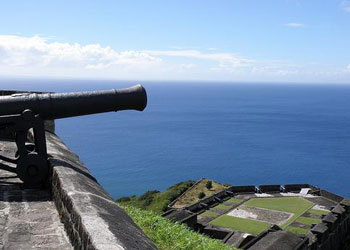 Brimstone Hill Fortress, a UNESCO World Heritage Site, is a complex of walls, fortifications and barracks built by the British in the 17th and 18th centuries to defend the island from attack. It's the largest fortress ever built in the Caribbean. On a clear day, the breathtaking view from the top encompasses Mount Liamuiga, the verdant St Kitts scenery, and the sparkling Caribbean sea, dotted with several islands. Sited on the southwest coast of St Kitts, about 12 miles from Basseterre.