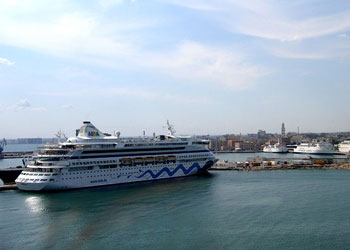 The port of Bari, Italy. Cruise ships dock at the Wharf warehouse pier, a half-mile walk (or shuttle-bus ride) into the wonderful old medieval center of Bari, a tangled network of streets and alleys (also called Bari Vecchia). Bari is the capital of the ‘heel shaped’ Apulia region of Italy.


The Basilica of San Nicola 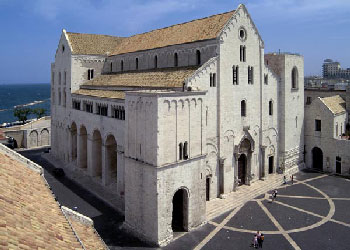 At the heart of Bari Vecchia stands the magnificent Basilica of San Nicola, constructed in the 11th and 12th centuries to house the relics of Saint Nicholas (also known as Saint Nick, or Santa Claus). The saint’s remains, buried deep in the crypt, were stolen by Bari sailors from Myra in Turkey (where Saint Nicholas was bishop). 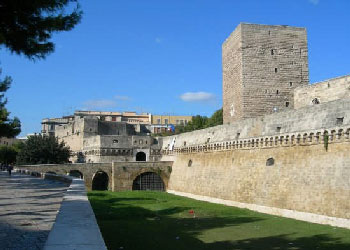 Brooding over the old city is the massive Castello Svevo (or Norman-Swabian Castle), one of most impressive of the Apulian castles. Much of what you see today was constructed by Holy Roman Emperor Federick II of Swabia, who remodeled and extended an existing castle attributed to Ruggero The Norman. The castle has a museum section displaying a variety of exhibits, such as Romanesque plaster casts. 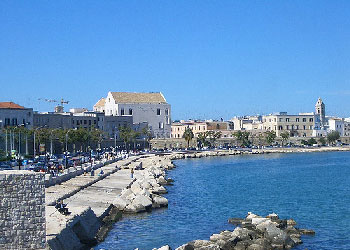 Bari has an enjoyable waterfront promenade, the Lungomare which starts at the marina just to the east of the old town, and continues for about a mile to the Pane e Pomodoro beach . On one side there are beautiful views over the Adriatic, and to the other interesting sights into the elegant residential district of the city. 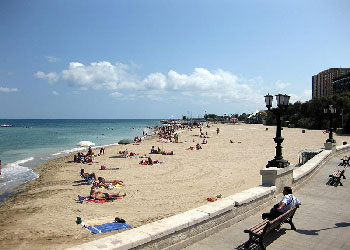 Pane e Pomodoro beach, at the end of the Lungomare, is a pleasant city beach, though it’s very busy at weekends. Probably best for a picnic (bread and tomatoes would be good!), rather than a swim, as the seawater quality can be poor (though those problems are history, according to the city council). Accessible by the Park & Ride Bus B - alight at the Corso Trieste stop. 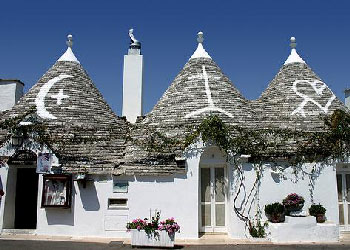 Alberobello must be one of the most photographed towns anywhere, for its quaint trulli houses make a memorable sight. The trulli are made (without any mortar) with limestone stones collected from the adjoining fields. The origin of the trulli was a feud between neighboring counts, who quarreled over an area of land. One of the counts decided to go ahead with building on the disputed fields, but he ordered his farmers to built drywall homes, dismantlable in a single night. Alberobello is about 40 miles south east of Bari.