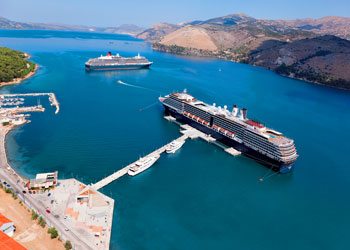 The new cruise ship pier at Argostoli, Kefallinia. It's a short walk from the pier to the town center. But there's only one berth, so overflow ships must tender their passengers to shore. 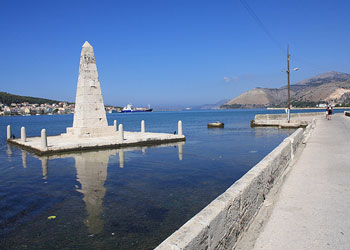 De Bosset bridge is a half mile long pedestrianized stone causeway linking Argostoli to the village of Drapano. Crossing the bridge is an enjoyable stroll, with gorgeous views back across the bay and the town. Half way along there’s a commemorative obelisk, dating back to the days when the British controlled the island. 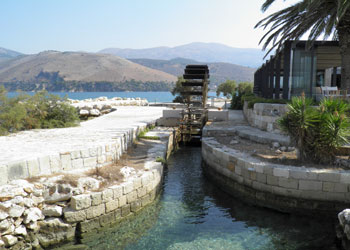 At Katavothres the sea flows inland and disappears into sinkholes in the ground. In 1963 Austrian geologists added dye to the water and found that it flowed right under the island to Melissani lake, near the opposite coast. After inspecting the impressive phenomenon, you can walk around Fenari beach towards picturesque St Theodore lighthouse. Katavothres is located at the north of the Argostoli peninsula, about a 3km north of the town. 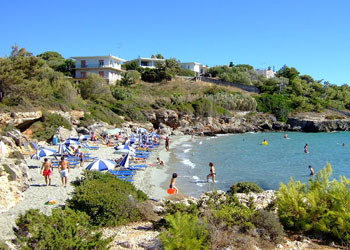 Gradakia beach is the nearest beach to Argostoli, about 2km west from the town. Behind the sands there’s a small taverna which also hires out sunbeds and beach umbrellas. The beach is easy to reach via taxi, or by a half-hour (but hot) walk. 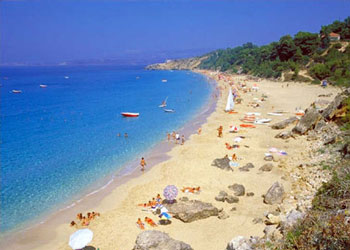 Makris Gialos, a wide sweep of fine golden sand, is one of the most popular beaches on the island. Facilities available include sunbed and umbrella rental, beach shops, and a beach bar. Makris Gialos beach is in the resort of Lassi, about 4km south-west from Argostoli. There’s an hourly bus service between the two. 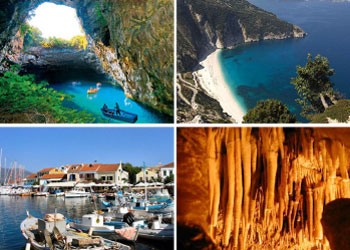 If you want to go further afield,and explore more of the beauty of Kefalonia, your options are a ship excursion island tour or renting a car. Highlights of the island include Melassani Lake, a spectacular underground lake, Myrtros beach, the island’s most beautiful beach, Fiskardo port, a pretty fishing village, and Drogarati Cave, a deep cavern with impossibly long stalactites and stalagmites.