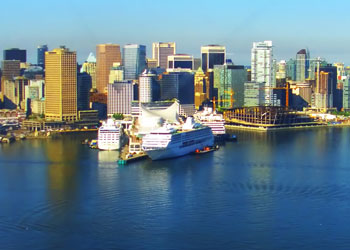 Surrounded by snow-topped mountains, huge verdant forests and cold clear seas Vancouver counts as one of the world’s most attractive cities. The city sits on the west coast of Canada, protected from the stormy Pacific by the huge landmass of Vancouver island.

The vast forests on the west coast of Canada were a huge potential source of timber, and the late 19th century heralded the founding of a number of lumber enterprises. A new sawmill was build on the Burrard peninsula in 1867. The neighborhood around the mill was called ‘Gastown’ after a bar owned by one of the locals. In 1870 the colonial government of British Columbia developed a plan for the new settlement of Granville, to be located beside Gastown.

In 1871 Granville was selected as the finishing stop for the Canadian Pacific Railway trans Canada railway. In 1886 the city’s name was changed to Vancouver, and in the same year the first ever CPR train arrived at the newly-built railway station. But later in the same year the city was almost entirely destroyed when the Great Vancouver fire raged through the center. A period of reconstruction followed, this time using fireproof building materials.

The city continued to grow through the 20th century, with large influxes of migrants from eastern Canada, Europe and Asia. Today Vancouver is the largest city on the west coast of Canada. The city hosts the headquarters of many major companies, and boasts an important commercial shipping port.

Vancouver’s expansion owes much to its steep northern shoreline which serves as a natural port. In early times timber and corn were the most important goods transferred onto ships at the docks. Aside from large cargo ships, smaller boats followed the route along the coast north from the city, supplying resource industries, which were based on timber, fishing and mining.

Cruise passenger numbers continued to grow steeply from some 20,000 in 1970 to 1 million by 2000. However the advent of Seattle into the cruise market in 2000 brought Vancouver’s growth to a halt. The number of people departing on cruises from Vancouver slumped to approximately 600,000 by 2010.

Vancouver's cruise terminal is called Canada Place - it is situated at the center of the city, on the site of the historic CPR pier B-C. The cruise terminal is part of the original Canada Pavilion from the 1986 World Exposition, with its a distinctive 5 sail shape, designed to represent the region’s maritime history. As well as the cruise terminal, the massive building contains a World Trade Center office, the Port Metro Vancouver office, a Pan-Pacific hotel and a large VINCI car park.

Prior to embarking, every passenger is obliged to clear US customs, streamlining processing at Alaskan ports. As an alternative American passengers transferring directly from Vancouver airport can follow the US Direct Program, this allows for fast-track customs clearance.

Stunning Alaska is the number one destination for cruises departing out of Vancouver.

Winters in Alaska are long and cold, so Vancouver’s cruising season is firmly confined to May through to September.

Vancouver is the sole departure point for Alaska cruises via the stunning Inside Passage, the narrow strait between the mainland and Vancouver Island. If you’re liable to being seasick, you’ll value the calm seas of this route as against that of the Pacific ocean route taken by Seattle cruises. Early advertisements even promoted the journey as 'seasickness unknown'.

A favorite route for cruises from Vancouver is the week-long return trip with calls at Glacier Bay, Ketchikan, Tracy Arm Fjord, Juneau and Skagway. You will see majestic coast and mountain scenery, huge glaciers calving into the sea and picturesque ports steeped in history.

Another option is to take a 7 day one way cruise from Vancouver visiting Glacier Bay, Ketchikan, Juneau and Skagway before crossing the ocean to finish at Seward or Whittier. You can return by another cruise, or by plane from Anchorage airport. An advantage with a one-way cruise is the opportunity pre or post cruise to take a tour deeper into the interior of Alaska.

Though few, there are other cruise choices. A multi week trip to the beautiful islands of Hawaii. Or a voyage down the magnificent coastline of Washington, Oregon and California to Los Angeles. And when the Vancouver cruise season finishes a range of interesting repositioning cruises are on offer, to a variety of exciting destinations.

Things To Do Near Vancouver Cruise Port

Many of the city’s favorite sights are within walking distance from Canada Place. There's also a frequent hop-on hop-office bus which takes a circular route visiting the main sights.

A fast elevator ride takes you to the roof of the 581 feet tall Harbour Center Tower. There’s a panoramic view of the bustling city, the wide blue sea and snow-capped mountains.

The attractive buildings and cobblestone roads of Gastown form the center of old Vancouver. Though the first timber buildings were all completely burnt to the ground in the great fire of 1886. See the quaint steam clock hiss and hoot, the edifice of ‘Gassy Jack’ then have a quiet stop at a friendly café.

In the center of the city’s booming Chinatown, you’ll find the lovely Dr. Sun Yat-Sen Classical Chinese Garden. The Garden is based on the blending of the four elements, water, plants, architecture and rock, so generating perfect equilibrium.

Stanley Park is the biggest urban park in North America. Here you’ll find the Vancouver Aquarium and an intriguing assortment of native American Totem Poles. Enthusiastic hikers can follow the 5 mile coastline path, which gives lovely views over Burrard inlet and the ocean.

Hundreds of feet above the Capilano river swings the long Capilano Suspension Bridge. After tottering across the bridge, venture onto the Treetops adventure, where you scramble along walkways hung high above the ground to see the mighty trees of the temperate forest close up. To reach the Capilano Bridge take the shuttle bus from Canada place, or bus number 236 which leaves from Lonsdale Quay (the northern Sea Bus terminal).

If you’d like to see a Grizzly bear face-to-face (well nearly!), take the short trip up to the top of Grouse Mountain. Here you can watch bears and wolves at the 5 acre Wildlife Refuge. Other summer attractions include hiking, paragliding, falcon center, zip-lining, helicopter flights and lumberjack shows. Bus 236 from Lonsdale Quay stops at Grouse Mountain, journey time about quarter of an hour. A short ride in the gondola carries you up to Peak Chalet at 3700ft.

By Car From the US

Canada Place
Head across the US/Canadian Border on I-5. This turns into Rte 99. Continue north. Keep on 99 and cross the Oak Street Bridge. Turn left on 70th Avenue. Then make a right on Granville St. Continue northwards crossing Granville Street Bridge. Take the Seymour Street exit. Continue northwards along Seymour St until you reach West Cordova Street. Head left onto West Cordova Street. Next turn right on Howe Street, and after a block you’ll get to Canada Place. Parking facilities can be found at Vinci car parking.

Ballantyne
Drive across the Canadian Border via Interstate 5. I-5 turns into Route 99. Leave at junction 36 and turn right to Route 1. After two-thirds of a mile turn left onto Knight Street. Knight Street will become Clark Drive. Carry on on Clark to the foot of Clark next turn right onto Stewart Street. Proceed around half a mile to reach Ballantyne. No parking facilities are available at the cruise terminal, but an option is cruisepark, positioned on the waterfront between Ballantyne and Canada Place.

From Vancouver International Airport
The majority of passengers booked on cruises from Vancouver travel in by air to Vancouver airport. The sleek Canada Line Skytrain, constructed for the 2010 Winter Olympic Games offers an efficient transfer from the airport to Waterfront station with a journey time of half-an-hour. Trains are frequent. Canada Place is a short walk from the station. However Ballantyne is a cab ride away. Another option is to take a cab from the airport to your cruise terminal. The journey takes about half-an-hour. 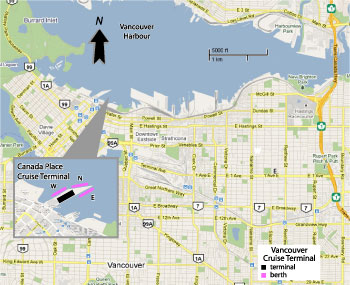