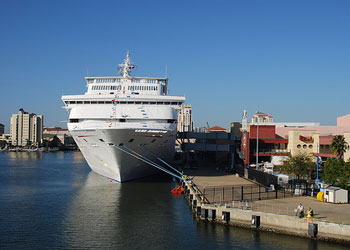 Tampa is positioned on the western coast of Florida, around 40 miles westwards from Orlando.

Tampa can trace its origins back to the small outpost of Fort Brooke, founded by the US Army in 1824 at the head of Tampa bay to help defend the strategic harbor. Tampa remained an isolated and little populated village until 1884 when the Florida railroad entrepreneur Henry B Plant resolved to build a railroad which passed through Tampa, ending at Port Tampa on the Interbay Peninsula. Following the completion of the railroad, Plant established a ferry ship service ferrying post, passengers and cargo between Havana, Cuba and Port Tampa. Plant’s efforts did not finish with the railroad and shipping company, for he then started with a project to create a number of fabulous hotels in the area, such as the famed Tampa Bay Hotel in Tampa.

In the late 19th century the Tampa Board of Trade enticed the Cuban Don Vincente Martinez Ybor to establish a new cigar-making factory in the town. The cigar business quickly grew in size, in no little way due to the fact it was perfectly sited between the retail markets of mainland USA and the supply of tobacco coming in through Port Tampa.

By 1900 Tampa had increased in size from a tiny outpost to a large town. Its growth continued throughout the 20th century, and today Tampa has become the third largest city in Florida boasting many thriving businesses.

The economic success of Tampa is in no small degree down to its busy commercial port. Port Tampa, on the south west tip of South Tampa, was superseded by the Port of Tampa (now Port Tampa Bay) when in 1917 a shipping channel was dredged to the docks at Tampa city.

Tampa was a major departure and arrival port for foot passengers in the late 19th century but passenger operations dwindled during the 1900s. Vacation cruises from Tampa only began in the 1980s when HAL and Regency Cruises commenced operating cruises out the Port of Tampa to the Caribbean. The cruise company Carnival noted the demand for these cruises, and set up their own cruise program out of Tampa in 1994.

The Garrison Seaport Center scheme of the late 1990s incorporated the creation of Cruise Terminal 2. Facilities available include luggage carts, customs, a snack shop, restrooms and cab rank. The terminal has just one cruise ship quay. Terminal 2 is used by Carnival. Parking is located straight across the street at the Channelside multistory car lot.

Cruise Terminal 3 was constructed in 2002 to meet the need of a rising demand for cruises out of Tampa. The terminal offers a streamlined passenger embarkation and disembarkation area, baggage facilities and fast security. The terminal offers just one cruise ship quay. Terminal 3 is used by Royal Caribbean, Holland America Line and Norwegian Cruise Line cruise ships. Parking is located directly across Channelside Drive at the Channelside multi-storey car lot.

Cruise Terminal 6 is sited half-a-mile to the north of Terminal 3. Terminal 6 was fully renovated in 2011 to provide facilities for Holland America Line. The terminal services a single quay. Car Parking is conveniently available on-site.

A 7 day voyage around the Western Caribbean is the most common itinerary for cruises from Tampa.

The variety ports-of-call make for a fabulous vacation. You’ll be able to enjoy a wide range of excursions - in Key West eat delicious Key Lime pie at the legendary Sloppy Joe’s, in Roatan swim in the warm waters off Half Moon Bay Beach, in Cozumel take a shore excursion to the iconic Mayan ruins at Tulum, in Grand Cayman amble along the beautiful sands of gorgeous 7 Mile Beach, in Costa Maya visit the amazing flora of the dense rain forest and in Belize enjoy ever-popular Cave Tubing in the Sibun Caves.

Alternatives include a cruise to the Eastern Caribbean visiting the sun-kissed islands of St Thomas, St Maarten, and Antigua, or a voyage to the far flung islands of the Southern Caribbean, calling at the exotic islands of Aruba, Bonaire, and Curacao.

Things To Do Near Tampa Cruise Port

Florida Aquarium
Everybody will wonder at the myriad of sea life at the Florida Aquarium. Much-loved exhibits include Ocean Commotion, Explore A Shore, Wetlands, Dragons Down Under and Bays and Beaches. Extra activities are available like Shark Feeding behind the Scenes and Wild Dophin Ecotour. The Aquarium is positioned adjacent to cruise terminal 3.

SS American Victory
The cargo vessel SS American Victory served in WWII, the Korean War and the Vietnam War. It has now been converted into a working museum. Come aboard and see virtually the whole ship including lifeboats, cargo equipment, galley, the bridge and food hall. The SS American Victory is anchored at a quay close by the Florida Aquarium.

Henry B Plant Museum
Henry B Plant built the fabulous Tampa Bay hotel as a destination resort for winter tourists to Tampa. It’s sumptuously constructed in a similar style to a Moorish palace, with added flourishes of Victorian architecture. Today the hotel building is occupied by the University of Tampa, but it is also home to the very interesting Henry B Plant Museum, which chronicles the life of the celebrated railroad magnate.

By Air
Most passengers booked on cruises from Tampa fly in to Tampa International Airport. The airport is very convenient to the cruise terminals, as the distance between the two is only about eight miles. The easiest way to make the journey is by cab. 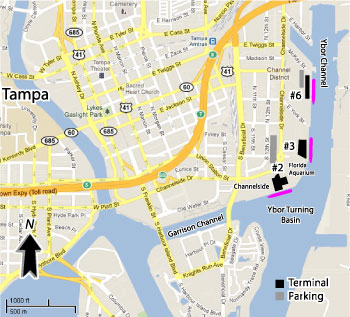