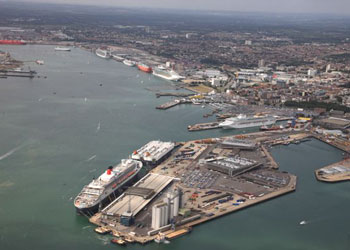 Southampton, 'Cruise Capital' of the UK

The Port of Southampton became famous in the twentieth century as the United Kingdom's foremost port of departure for the great cruise lines. In terms of number of passengers, the most popular route used to be the transatlantic crossing to the USA. But in 1939 the first Pan Am passenger flight across the Atlantic signaled the finish of this golden time of ocean travel. In the following years Southampton came to prominence as a major Cruise port. Today the number of cruises from Southampton on offer each year is well over five hundred.

The Eastern Docks witnessed perhaps Southampton's most famous event. In 1912 the Titanic left from White Star Dock (near today's Ocean dock) on its first voyage. When the ship went down, of the 1500 lives lost, 500 were crew who lived in Southampton and the impact on the city was enormous.

Queen Elizabeth II Terminal - Berth 38/9
The QE2 terminal was opened in 1966 by the Queen. The dock is home to Cunard's cruise liners, Queen Mary II, Queen Elizabeth and Queen Victoria. Facilities include a short stay car park, a bar, a taxi rank and a cafe. The viewing area is closed to visitors.

Ocean Cruise Terminal Berth 46
The first Ocean Cruise Terminal was a designer Art-Deco construction. Sadly this was demolished in 1983 The modern building, finished in 2009, is a total change from its namesake, being a huge modern design with simple curved lines. Facilities available include a short stay car park, a taxi rank, a bar and cafe.

City Cruise Terminal Berth 101
This Terminal has completed a 7 year refurbishment to double its capacity. It can now manage the largest 'Freedom Class' ships of RCI. Facilities include a short stay car park, a taxi rank, a bar and cafe. The nearby Mayflower Park is a good point to watch cruise ship departures.

Horizon Cruise Terminal Berth 102
Horizon cruise terminal was opened in 2021, the result of a strategic partnership between the port, NCL, and MSC Cruises. The two level state-of-the-art terminal offers a full range of facilities, including check-in, baggage handling and security.

The choice of cruises from Southampton is possibly the best of any departure port in the world. Itineraries from Southampton include voyages north to the magnificent Norwegian Fjords, north-east to the Baltic Sea and majestic St Petersburg, south to the beautiful Canary Islands, or south then east to the Western Mediterranean or Eastern Mediterranean. Another popular alternative is a voyage around Britain. If you're an ocean lover and enjoy sea days, another option is the classic westbound transatlantic voyage to New York. Finally how about the cruise of a lifetime - Round The World.

Cruises from Southampton are easily accessible, thanks to its good rail and road links.

Things To Do Near Southampton Cruise Port

Southampton is normally viewed as a departure/arrival port, and not many cruise passengers spend time investigating the city itself. But if you've spare time either before or after your cruise, there's a lot to see and do.

Old Town
During medieval times, Southampton was encircled by a fortified wall with imposing gate buildings. The 'Bargate' at the northern entrance to the old town, is still Southampton's best known landmark. The building is a good place to begin the tour of the walls. Stop at the guard towers, the ruins of the castle, the West Gate, the remains of the and God's House Tower where you'll find houses} the Archaeological Museum (free entry). Other noteworthy places include the restored Medieval Merchants House, the Maritime Museum located in the Wool House (free entry), with its Titanic exhibition, and the remarkable Tudor House, another (free entry) museum with a peaceful garden.

Shopping Centers
The city's main shopping center, Above Bar, is home to major high street chains. An alternative destination is Ocean Village with its undercover shopping, a peaceful marina and many bars and excellent restaurants. Another option is the new West Quay shopping mall which features leading shops.

Theater
The Mayflower theater stages leading productions throughout the year.

The Titanic Trail
Walk around the marked trail finding out about locations associated with the Titanic. The walk starts at the Musician's Memorial and stops at the Maritime Museum, situated in the Wool House at Town Quay, which tells the history of the tragic voyage.

The Jane Austen Walking Trail
Jane Austen first came to Southampton when she was 7 years old and she often vacationed in the city. Later on she lived in the city. The Trail visits buildings with a connection to the author.

The New Forest
An enchanting location known for its rugged heaths, and commoner rights of pastures.

By Road
The majority of passengers booked on cruises from Southampton travel by road from the South-East of England. The M27 motorway, which joins places bordering the southern coast of England, runs just to the north of Southampton. The M3 motorway connects the city to London and also, by linking to the A34 road at Winchester with the Midlands and North. The M271 motorway, off the M27, joins it with the Docks and city centre.

By Train
Direct train services connect Southampton with London, and many places in England. There is a frequent train between London Waterloo and Southampton Central, the journey time is around 80 minutes. Rail routes run east towards Portsmouth, north towards the Midlands and beyond, and westwards to cities like Bournemouth and Bristol.
From the train station you can either catch a taxi, or take the free CityLink bus service between the rail station and Town Quay every quarter-hour. 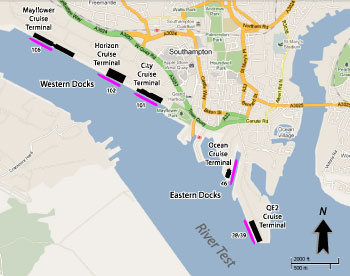