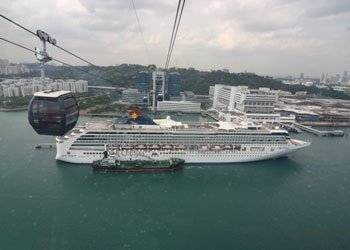 Strategically situated at the meeting place of trading routes, Singapore lies off the southern tip of the Malay Peninsular in South East Asia just 87 miles (140km) north of the Equator.

The city was founded by Sang Nila Utama, a Sumatran Prince, who combined the Sanskirt words 'Simha' (lion) and 'Pura' (city) in naming the city 'Singapura'.

Modern Singapore was established in 1819 by Sir Stamford Raffles who signed a treaty with local rulers which handed dominion of Singapura over to the British.

The new trading outpost expanded quickly. Europeans, Indians, Malays and Chinese came to live and work. By 1900 the population had risen to about 210,000. In 1924, a causeway opened linking the northern part of Singapore to Johor Bahru on mainland Malaysia.

The city's booming growth as a trade center came to an abrupt halt in WWII when the island was captured by the Japanese in 1942. Their rule lasted for three years and is a bloody period in the state's history marked by abductions, repression and executions. In 1945, Singapore returned to British control.

In 1958 the British Parliament passed legislation to enable Singapore to become a sovereign state. The following year Singapore ran its first ever elections for a government for the newly independent country.

Today the city boasts mega businesses operating in in the fields of banking, life sciences, communications and logistics, the second largest container port on the globe and a tourism industry welcoming more than 11 million people each year.

Singapore's cruise business has also gone from strength to strength. Currently the number of cruises from Singapore on offer each year is well over five hundred.

Singapore Cruise Centre offers efficient baggage services, separate passenger embark and debark areas, streamlined customs clearance and security screening. Passengers can enjoy a range of facilities at the centre including an information counter, free Wi-Fi, a duty free shop and left luggage services. The cruise port has one pier with two ship berths, one 310m (1020ft) in length, the other 270m (890ft). Singapore Cruise Center is also known as the International Passenger Terminal.

The striking exterior of the cruise terminal building is designed with a nautical theme to echo the shape of sea waves breaking onto the shore. The terminal is planned to facilitate a painless and smooth passenger flow and can handle two 3000-passenger ships at the same time. Facilities in the level 2 departure hall include cafe, food shop, foreign exchange point and visitor centre and facilities in the level 1 arrivals hall include public bus stop, ground transport desk, taxi rank, cruisefly counter and left luggage service. A 360m (1180ft) finger pier extends from the terminal with two docks one on either side. The Marina Bay Cruise Centre is also referred to as the International Cruise Terminal.

3 night weekend cruises to Penang and/or Port Klang (Kuala Lumpur) are very popular. If you are interested in a longer 7 day cruise, there are two excellent itineraries to choose from - a cruise along the eastern seaboard of the Malay peninsula (visiting Klang, Penant, Langkawi and Phuket), or a cruise that circumnavigates the Gulf of Thailand (visiting Ko Samui, Bangkok and Sihanoukville).

Favorite shore excursions on offer at ports-of-call include the heritage buildings of Penang's old city, the awe-inspiring Hindu shrines of the Batu caves (from Klang), the stunning waterfalls and verdant flora of the pristine hinterlands of Ko Samui and the towering Grand Palace of Bangkok.

Other cruises from Singapore include a huge range of longer itineraries offering exciting destinations like India, Hong Kong and Australia.

Things To Do In Singapore

You haven't been to Singapore if you haven't snapped lots of photos of the statue of the mythical Merlion in Merlion Park! The statue was constructed by local sculpturor Lim Nang Seng and was opened on 15 September 1972 by then PM Lee Kuan Yew to greet visitors to Singapore.

The imposing colonial-style Raffles Hotel, named after British statesman Sir Thomas Stamford Raffles the original architect of Singapore, has been Singapore's premier hotel sinces its grand opening in the late 20th century. Many drop by the hotel to visit The Long Bar, home of the celebrated Singapore Sling cocktail. Be sure to throw your monkey nut shells to the floor, as this is the only place in Singapore where littering is allowed.

Gardens By The Bay

Gardens by the Bay is a fabulous garden located on three sides of the Bay area built on land reclaimed from the bay in the 1980s. An easy getaway from mega skyscrapers and busy traffic, the Gardens offer a tranquil space to admire greenery from across the globe and the Cloud Forest, the Flower Dome and the Supertrees show plants in a way never seen before. Gardens By The Bay is a short distance from the Marina Bay Cruise Centre.

The iconic lotus flower shaped ArtScience Museum was conceived by the distinguished architect Moshe Safdie. The museum has a permanent exhibition with an arresting three dimensional video display and has two extra galleries for temporary exhibitions. The ArtScience Museum is near Gardens By The Bay.

Just a short distance from the noise of the city center lies the picturesque Siloso beach on the southern coast of Singapore's Sentosa island. Behind the beach there are a multitude of beach bars and cafes, offering a wide variety of food and drink. The beach is a short taxi ride from Marina Bay, or an exciting gondola ride from the International Passenger Terminal.

Another exciting outdoor experience is the canopy walk in the Southern Ridges. The six-mile walk can be started from Mount Faber Park (conveniently close to the Singapore Cruise Centre). On the walk, you'll see the rich vegetation of Singapore and wild monkeys.

Traveling to the Cruise Terminals

The majority of international passengers booked on cruises from Singapore travel to the cruise terminal from the airport. The easiest way to make the transfer is via taxi. These are cheap and plentiful in the city. Make sure to know the correct terminal for your cruise. 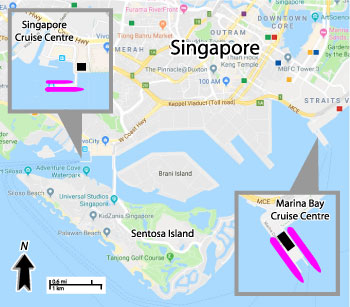