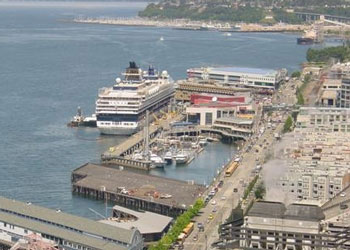 The first settlement near the Seattle region, built in 1850, was called New York. The settlers then relocated a short way across Elliott Bay to what is now the historic Pioneer Square area, which had an excellent sea harbor. In respect to a local native Indian leader who had aided the pioneers, this new village was given the name Seattle.

Processing and shipping out timber was the first business enterprise of the new town. In the fall of 1863, a surveyor discovered coal beside a stream draining into Lake Washington. Soon full scale coal mining began, and coal joined lumber as a principal export from Seattle port.

In the 1880s the city’s population rose quickly when the city was connected to the Northern Pacific railway. But growth faltered when in 1889 the city was almost entirely ruined by a raging fire sweeping through the center. A decade of reconstruction followed, this time utilizing fire resistant steel, bricks and stone paving.

The early part of the 19th century saw a time of continued growth, as people from all around the world flooded in to work in the business, resource and service sectors. Ship building activity surged in importance during the World War I years, thanks to huge demand. The end of the war heralded the Seattle strike, which gave the city a reputation as a center of workforce activism and socialism.

Unemployment and suffering were widespread among the city’s population during the deep 1930s Depression years. The city’s economy rebounded in World War II, led by the company Boeing, who boosted their workforce to manage the soaring demand.

In 1962 Seattle took an opportunity to host a huge world's fair, the fantastic Century 21 Exposition. The fair left the city a permanent legacy in the iconic structures of the Seattle Center, the Pacific Science Center, the Monorail and the Space Needle.

Today the city is a world center for business, marketing and banking, home to enormous businesses such as Amazon, Starbucks and Real Networks.

Seattle’s deep-water port has long been important to its economic growth. To start the docks were utilized for the export of lumber and coal. Apart from the large cargo ships, smaller ships sailed the route along the coast northwards, supplying resource ventures based on fishing, wood and mining.

The Bell Street Pier cruise port was inaugurated in 2000 as a important part of a 10-acre, city center, waterside, multi-purpose project. The terminal is sited on Pier 66 which has a long history all the way back back to 1914. Over the years the dock had several functions including warehousing, railway station and refrigerated storage.

The Smith Cove cruise terminal is sited 2 miles north west from downtown, on Piers 90 and 91. The waterfront was bought by Seattle Port in 1912 for use as a industrial port. During WWI the navy utilized the port as a resupply base. Because of its history, Smith Cove surroundings have an industrial look.

Magnificent Alaska is the main destination for cruises departing from Seattle. So, thanks to Alaska's long and harsh winter, Seattle only operates as a cruise port during summer.

Cruises from Seattle follow a different route to Alaska than cruises departing from Vancouver. The quickest route is to keep to the ocean side of Vancouver Island as you head North. The additional round-trip mileage (compared with the Inside Passage route from Vancouver) is about 350 miles. This ‘outside passage’ route crossing the vast north Pacific ocean can be stormy and rough, and there is little picturesque land scenery to see for the 2 days of the cruise when the ship makes the crossing.

Also note that cruise ships will more often than not stop at Victoria on Vancouver island’s coast, since all foreign-flagged cruise ships operating in US waters are required to include a stop in a non-US port in their overall itinerary.

A favorite route is the 7 day return trip calling at Tracy Arm Fjord, Juneau, Skagway and Ketchikan. The passenger will see spectacular coastal and mountain panoramas, mighty glaciers falling into the ocean and historic port-of-call towns.

When the Seattle cruise season finishes a variety of exciting repositioning cruise vacations are available to far-off places like Asia, California, and Florida.

Things To Do Near Seattle Cruise Port

Space Needle
Seattle’s iconic Space Needle is 605 ft high, and has an exciting viewing level below the top. You can see magnificent views of the city center, Puget Sound, Washington Lake, and the far-off mountains. Stop at the gift shop for a souvenir or, for a meal with a difference, dine at SkyCity, the tower's rotating restaurant that turns once per hour.

Pioneer Square
Pioneer Square is the location of Seattle’s first timber mill, the center of the original pioneer town. However Seattle’s 1889 fire destroyed all the wooden houses built by the pioneers. The area is now distinguished by late nineteenth century brick and stone buildings, and is bursting with magnificent architecture, art galleries, bookshops and interesting shops. Pioneer Square is located about a mile southwards of Bell Street Pier.

Museum of Flight
As befits the home of behemoth Boeing, Seattle has a spectacular Museum devoted to aviation. Check out a traffic control tower, a superb collection of WWII fighter planes, a mockup of the International Space Station, a history of the fashion of flight attendants and the amazing reusable Shuttle space plane. If you’d like to get interactive, check out your skills as a plane pilot in a flight simulator. Seattle Museum of Flight is situated about 4 miles south of downtown.

Pike Place Market
One good place to start your visit to Seattle is the Pike Place market, one of a small number of farmers’ city markets to remain in the USA. There’s a huge number of stalls to walk around, with many goods even now arriving straight from the farmer’s gate. It's often busy and crowded, so you’ll be grateful to take a relaxing break and sip a coffee at the original Starbucks, next to the market. The market is just next to Bell Street Pier.

Olympic Sculpture Park
The Olympic Sculpture Park is maintained by Seattle Art Museum. It is a free sculpture park containing a whole series of abstract and thought-provoking sculptures, with a beautiful view over Puget Sound and the Olympic mountains behind. The park is situated on the coastline quarter of a mile north west of Bell Street Pier.

Traveling to the Seattle’s Cruise Ports

The majority of passengers booked on cruises from Seattle fly in to Sea-Tac airport, then continue to their cruise terminal by cab or pre-arranged shuttle bus. If however, you're independently minded, travel directions are as follows:

From the Airport
The travel time from Sea-Tac airport to Bell Street Pier by cab is around 30 minutes.. As an alternative you can catch the Sea-Tac airport Central Link Light Rail, getting off at the final station Westlake. Next catch a taxi or walk to Bell Street Pier, three-quarters of a mile away.
By Car
From the North
Join Interstate 5. Take exit 167, signed Mercer Street/Seattle Center. Make a right onto Fairview Av. Take the first left onto Valley Street. Carry along Valley St which turns into Broad Street. When you reach the waterfront turn left onto Alaskan Way. Immediately before the cruise terminal building, turn left onto Wall St to access the cruise terminal parking.
From the South
Join Interstate 5. Take exit 164A signed Dearborn St, James St/Madison St. Follow Madison St/Convention Center signs. Make a left onto Madison St. Continue on Madison Street until you get to the waterfront. Make a right onto Alaskan Way. Carry on for a mile, until you pass the cruise port to the left. Make a right onto Wall Street for the access to Bell Street Pier garage.

From the Airport
The journey time from Sea-Tac airport to the cruise terminal by taxi is around 30 minutes.
By Car
From the North and South
Take Interstate 5 to exit 167 signed Mercer Street. Make a right turn on to Fairview Avenue North. Make a left onto Valley Street. Valley Street becomes Broad Street. After the Space needle make a right onto Denny Way. Bend to the right onto Western Avenue. Western Av connect to Elliott Av West. Follow signs for Magnolia Bridge. Follow signage to Smith Cove Park and cruise terminal. 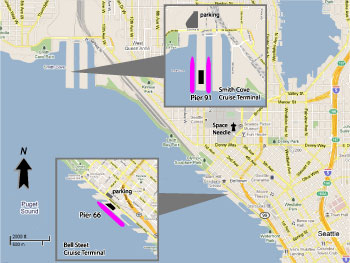