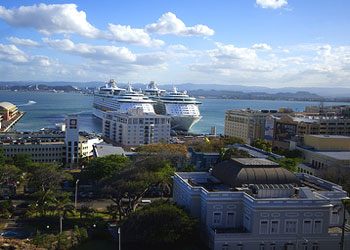 San Juan, capital of Puerto Rico, The Isle of Enchantment

San Juan is the capital of and the largest city of Puerto Rico. Located on the north coast of the island, it is the second-oldest capital established by Europeans in the Caribbean (the oldest is Santo Domingo of the Dominican Republic). The Spanish originally called the seaport Ciudad de Puerto Rico and the whole island San Juan. Over time, everyday usage has swapped over one with the other.

Today San Juan is the major seaport for Puerto Rico, and also serves as the country's center for tourism, finance, culture and manufacturing.

The old city of San Juan offers an authentic Old World feel with over 400 renovated Spanish 16th and 17th century buildings, and many historic sights. The area also is home to many shops, casinos and restaurants for the enjoyment of tourists and Puerto Ricans alike.

There are a wide range of cruises from San Juan. Knowledgeable cruise vacationers often pick San Juan as an alternative to a Florida departure port as, thanks to its central Caribbean location, the island offers quick access to fabulous Southern Caribbean ports, like the Windward Isles and the Netherland Antilles. A short flight is often a better alternative to the long cruise to these destinations from mainland USA.

The wide choice of cruises available from San Juan includes the Eastern Caribbean (the Leeward Isles of the USVI, St Maarten, St Kitts, and Antigua), the Southern Caribbean comprising the Windward Isles (Dominica, St Lucia, Barbados, St Vincent, Grenada,Tobago), together with the Netherland Antilles off the northern coastline of Venezuela (Aruba, Curacao and Bonaire).

Things To Do Near San Juan Cruise Port

Characterful Old San Juan sits on a bluff facing the Atlantic northwards, and the port to the south. This walled and fortified area, now an important historic landmark, was founded in 1510. Old San Juan is a small area, quick to get around on foot. If you want to save your legs catch the free bus that shuttles between sights. Take time to stroll along the narrow cobblestone streets and check out the pastel colored buildings, craft shops, and visit the informative museums.

El Morro Fort
El Morro, an enormous fort dating back to 1539, protects San Juan from sea pirates. Its full name is Castillo San Felipe del Morro, after the patron saint of King Philip of Spain. You can walk around six levels of gun emplacements and along the tops of huge stone walls that loom over the Ocean.

La Fortaleza
Another must-see is La Fortaleza, San Juan's most ancient fort, constructed in 1540. Later it was to become the official residence of the governor. Daily tours lead you on a walk through the sumptuous building, with golden banquet hall, high galleries, and rooms decorated in period style.

Cathedral de San Juan
This marvelous cathedral dates back to 1592, on the same site of the previous cathedral that was smashed by a storm. Located on Calle Cristo, this neoclassical structure holds the crypt of Ponce de Leon, a Spanish explorer, and the 1st governor of Puerto Rico.

Escambron Beach
All beaches in San Juan are public, and Escambrion beach, on the Atlantic coast is among the most beautiful in the city. It's quick to get to, and offers wonderful views back along the coastline to El Morro. Condado beach, just a little more along the coast, is also worth a visit.

Shopping
Most of the shopping in Old San Juan is centered on the multitude of stores along San Francisco, Cristo and Fortaleza streets. Also go to the two craft markets where you'll find a wide range of jewelry, fashions, art and souvenirs. One is located at the Plaza de la Darsena, in front of pier 1, the second on the Paseo de la Princesa, a short distance along from pier 1.

From the Airport
San Juan airport is positioned about 9 miles from the Pan American quay and 12 miles from the Old San Juan piers. It usually takes around half an hour for the cab trip. The fare is around $20. Supplemental charges apply for luggage. 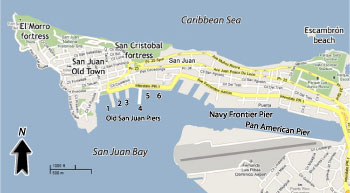