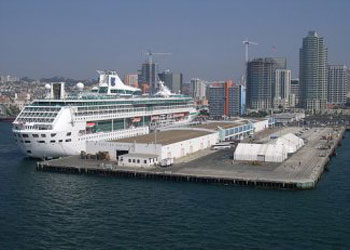 Legend Of The Seas docked at the San Diego Cruise Terminal

San Diego was founded by Spanish expeditionaries, who sailed into the bay as far back as 1542. Though it was nearly two centuries later before Spanish missionaries arrived to create an outpost.

Today San Diego is not only the oldest city in the Golden State, but also its 2nd largest. The city has a main naval center, an important commercial shipping harbor, and a thriving technology zone. San Diego's busy harbor and its closeness to the Mexican border impart on the city an bohemian vibe, and a bustling city center and a long historical past adds to this energy filled atmosphere. Boasting over 300 days of sunshine per year, the superb climate attracts many new industries and residents every year.

The city is the departure point for an attractive range of cruises, and cruises from San Diego are becoming ever more popular.

The San Diego Cruise Ship Terminal is located at 1140 North Harbor Drive at the B Street Pier, near to San Diego's city center. The adjacent Broadway Pier now also boasts a terminal, the Port Pavilion, described as the ports 'first green building'. The Broadway terminal is used as an overflow facility, so is only in operation when 3 ships are in port at the same time, or when the B Street terminal is undergoing maintenance. Both terminals offer a full range of facilities for cruise passengers leaving on cruises from San Diego.

The wharves at San Diego cruise ship terminal are numbered as follows. Quays on the north of B Street pier are one and two, on the west side three, and on the south four and five. The berths on the Broadway pier are numbered in an identical way.

On each of piers, berths 1 and 2 are combined to handle a big cruise ship, as are 4 and 5. Quay three is reserved for smaller vessels. Adding the capacity of the piers, the port is able to handle four cruise ships at once.

Choose from a super number of cruises from San Diego. Possibilities include the Mexican Riviera, the Islands of Hawaii, and the navigation of the Panama Canal continuing on to Florida. For the cruiser seeking something new longer itineraries to the South Pacific or South America are often available.

Things To Do Near San Diego Cruise Port

Maritime Museum of San Diego
Just north of the cruise terminals sits the Maritime Museum. Take a tour to see an excellent collection of historic ships, like the Star of India, Californian and Berkeley.

Seaport Village
If you like shopping, you'll love Seaport Village. To reach the village, walk or take a cab for around two-thirds of a mile in a southerly direction from B street pier along the coast. There are over 60 boutique stores, making it an ideal place to purchase a San Diego souvenir.

Balboa Park
The success of Balboa Park started in 1917, when a series of Spanish era buildings were designed and constructed for the Panama-California exhibition. Today the park has become the biggest city cultural park in the nation. Fifteen museums and galleries can be found in the twelve hundred acre area. The most well known is San Diego zoo, but other highlights include the San Diego Natural History Museum and the San Diego Museum of Art. In addition the park features magnificent flora, particularly the Inez Rose Parker Memorial Rose Garden and the Japanese Friendship Garden.

Spanish Missions
San Diego contains twenty-one Spanish catholic missions, built more than two centuries ago. The original task of the missions was converting the native Indians to religion. The first ever, known as the Mother of the Missions, is Mission San Diego de Alcala. This was founded in the late 18th century by Blessed Junipero Serra. Only six years after construction finished the mission was burnt down in a riot, but the building was soon remade.

Coronado Beach
Catch a half hour ferry ride to Coronado island. A short cab trip will get you to Coronado beach, a lovely stretch of fine, white sand on the Pacific coast. Drop in at the unique Hotel del Coronado, one of the few last examples of the Victorian beach hotel.

From the Airport
The cruise terminal is a short three mile drive from San Diego International Airport. Taxicab pick-up areas are located on the forecourts of each of the three airport terminals.

By Amtrak
Santa Fe Depot, Amtrak's central San Diego terminus, is only a quarter of a mile away from the cruise port, so you can go by foot or catch a taxi cab. If you are walking, go west on Broadway towards the waterfront. When you reach the water, the cruise terminal is in sight.

By Car
If driving south on I-5, continue along the highway into the middle of San Diego. Turn off at Sassafras, marked with a sign to the airport. Follow Kettner for three-quarters mile, until you get to Laurel. Make a right on Laurel and carry on west until you reach Harbor Drive. Turn left on Harbor Drive. The cruise ship terminal is half a mile on your right.
If driving north on Interstate 5, proceed along the highway into downtown San Diego. Exit at Hawthorn, marked with a sign to the airport. Continue along Hawthorn until Harbor Drive. At Harbor Drive, turn left. The cruise terminal is one-half mile on the right hand side. Several parking lots can be found. Booking your parking ahead is recommended. 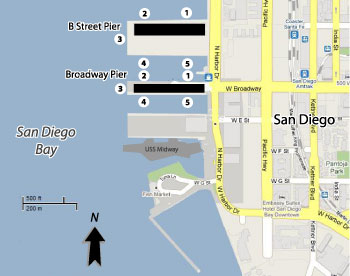