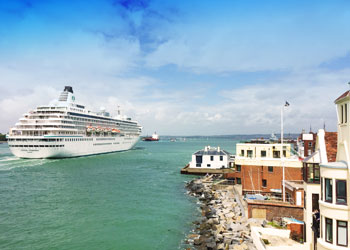 Portsmouth lies on the south coast on England, 70 miles (110 km) south west of London. The city is built on Portsea Island – actually more an isthmus than an island.

In the late 12th century, King Richard I was advised of the strategic importance of Portsea Island – it boasts two deep water harbors, one to the west, one to the east. The King ordered for the establishment of docks and a town on the island. By the end of the 13th century the new port had become one of the largest in England.

In Tudor times, Portsmouth served a key role in Henry VIII's plans for a stronger kingdom. The King directed the enlargement of the port into a naval port, and the building of Southsea castle to protect it.

To this day Portsmouth still boasts a major naval base and a thriving dockyard.

The award winning passenger terminal building was opened in May 2011 and has a light airy feel with space and comfort. The main concourse with its check in area, also has a currency exchange and shop, while up on the mezzanine floor there is a coffee outlet and a bar.

For a relaxing experience, try the outdoor terrace where you can look out over the port, before boarding the ship.

Beautiful, world-class luxury liners sail from Portsmouth, bringing opulence and elegance within easy reach. The ships departing from Portsmouth are small to medium size and cruise passengers will appreciate the informality and personal touch of the terminal staff. The range of cruises from Portsmouth on offer includes voyages around historic Britain, trips to the awe-inspiring fjords of Norway, journeys to the magnificent treasures of the Baltic, and expeditions to the rugged beauty of Iceland.

Things To Do Near Portsmouth Cruise Port

Portsmouth Historic Dockyard is the National Museum of the Royal Navy. See HMS Victory, the flagship of Lord Nelson, and HMS Warrior, the first iron ship of the navy.

Explore the remains of Henry VIII’s favourite ship, recovered from the seabed in one of the most challenging archaeological excavations of all time.

The D-Day Story is the only museum in the UK dedicated to the Allied Invasion in June 1944. It tells the unique personal stories behind this epic event.

Built in 1544, Southsea Castle was part of a series of fortifications constructed by King Henry VIII around England's coasts to protect the country from invaders.

Experience the wonderful panoramic view from the Spinnaker Tower – the stunning 560 foot (170 metre) icon of the South Coast.

From London:
Take the A3 towards Portsmouth, merging onto the M27, then the M275 clearly signposted for Cross-Channel Ferries.

From the North and the Midlands:
Take the M6 south, merging onto the M42 close to Birmingham then the M40. At junction 10 of the M40, take the A34 south to Winchester, where you join the M3 towards Southampton. Close to Southampton, merge onto the M27 towards Portsmouth, then the M275 clearly signposted for Cross-Channel Ferries.

From Wales:
Take the M4 towards London then close to Newbury take the A34 south to Winchester. At Winchester join the M3 towards Southampton. Close to Southampton, merge onto the M27 towards Portsmouth, then the M275 clearly signposted for Cross-Channel Ferries.

From the West Country:
Take the A30 from Exeter heading east, then the A30, A35 and A31 past Lyme Regis and Dorchester towards Southampton. Close to Southampton join the M27 towards Portsmouth, then the M275 clearly signposted for Cross-Channel Ferries.

The nearest rail station to the Port is Portsmouth & Southsea station. Frequent buses to the Port are available nearby in Commercial Road, or alternatively take a taxi from the rank outside.

Southampton Airport is located around 19 miles away, directly linked to the Port by the M27 motorway. A taxi ride will take around 20/25 minutes, alternatively rail links to Portsmouth & Southsea station by using the airport’s dedicated train station and changing at nearby Eastleigh.