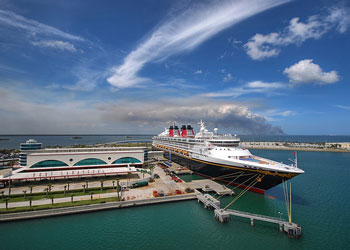 On Florida’s Atlantic coastline, halfway between Jacksonville and Miami, lies Cape Canaveral. Bounding the city to the north is Port Canaveral, to the west is the Banana River, to the south is Cocoa Beach and to the east is the Atlantic Ocean.

From early times this treacherous stretch of Florida’s coastline was respected by seamen, who named the headland Cape Canaveral. Due to the dangers to shipping, the Cape Canaveral Lighthouse was constructed in 1843, helping ships to safely navigate around the Cape.

The small farming and fishing township of Artesia grew up just south of the Cape in the 1910s. A decade or so later, a short distance to the south of Artesia, investors developed the area of Avon-by-the-Sea, with streets named after presidents. World War II brought about the establishment of a naval air base at the Cape to operate sea planes, to support local shipping. In the 1940s the US air-force opted for the Cape as a space base, because rockets could be launched over the Atlantic ocean in safety. The incoming flood of people led to a construction boom on the area southwards from the station, and in the 1950s Avon-by-the-Sea and Artesia joined up to form the city of Cape Canaveral.

The space center required a way of bringing in large rocket components by sea, and Port Canaveral was built and dedicated in 1953.

The attractions of central Florida are a huge lure, and during the 1970s Port Canaveral was first used by cruise ships as a port-of-call with easy access to Orlando. During the 1980s cruise terminals 2, 3 and 4 were built, and Premier Cruises (now bankrupt) and Carnival Cruises ships sailed out of at Port Canaveral, departing for multi-day voyages to the Bahamas. During the 1990s Disney cruises started operating cruises from Port Canaveral, utilizing the new specially built terminal 8. Terminals 5 and 10 were also built in this decade.

Cruise terminals 5, 6, 8 and 10 are positioned on the A or north docks, along Charles M Rowland Drive. These up-to-date terminals possess deep water docks with the ability to handle the largest cruise ships, and each can cope with more than 3000 passengers.

Cruise Terminal 5 is a stylish 2 story building, with a thirty foot high reception area resplendent with tropical vegetation and imaginative water features. Embarking cruisers are processed on the top story, debarking cruisers on the bottom. The length of the adjoining quay is 970ft.

Cruise Terminal 8 was specified by and built for Disney Cruise Line, and is an appealing modern building with an impressive 80 foot high glass tower entrance. Its quay length is 1000ft.

Cruise Terminal 1 opened in December 2014. The terminal is designed to accommodate the largest cruise liners afloat. Facilities include 60 check-in desks, security screening, baggage handling, an information point, retail outlets, and a large seating area that can be converted into an entertainments venue. The terminal is within easy walking distance of both the seven storey Exploration Tower and the Cove restaurant/bar/shops area. Next to the terminal stands a 4 level parking garage for 1000 cars.

Cruise terminal buildings 2, 3 and 4 are situated on the B or south west docks, along George King Boulevard. These terminal buildings featured as part of Port Canaveral's first facilities for cruise ships, and each can handle around 1800 passengers. A single dock of length 2153 ft is shared by the 3 terminals with the ability to berth two large or three medium-length ships. Beside each terminal building stands a parking lot.

The range of cruises from Port Canaveral include the Bahamas (Freeport and Nassau), the Eastern Caribbean (St Thomas, San Juan and St Maarten), the Western Caribbean (Cozumel, Roatan, Grand Cayman and Belize), and the Southern Caribbean (St Lucia, Barbados and the ABC islands) . Longer cruises are also occasionally on offer, such as repositioning transatlantic cruises.

Things To Do Near The Cruise Port

Kennedy Space Center Visitor Center
Space travel is possibly the greatest achievement of modern man. The Kennedy Space Center is the base of NASA’s operations and was the launch pad for the moon-landing Apollo missions. At the Center you can enjoy the Shuttle Launch Experience, go to the LC39 Gantry and the Apollo Center, watch a movie at the IMAX center and learn about what the future holds for space exploration at the Exploration Space show. The Center is about 10 miles northwards from Port Canaveral.

Jetty Park
Jetty Park is a lovely coastline park which offers a beach, pavilions, picnic areas, camping and a playground. A favorite with both walkers and fishermen is the pier, which gives close-up views of marine traffic departing from/arriving at Port Canaveral, and excellent fishing for common jacks, tarpon and redfish. The long sandy ocean-facing beach has many facilities including year-round lifeguards, easy parking, restrooms and showers. The park is operated by the Port Authority, and is positioned on the south coast of the port main channel.

Cocoa Beach Pier
Originally built in 1962 Cocoa Beach Pier is one of the best-known landmarks on the Space coast. The pier boasts five restaurants, souvenir shops, four bars and occasional live musical entertainment. The beach next to the pier offers all year lifeguards, showers, beach-hire concessions and restrooms. Cocoa Beach is situated around 4 miles southwards from Port Canaveral.

Orlando Amusement Parks
Drive west from the Port on Martin Andersen Beachline Expressway to reach fabulous attractions like Sea World of Florida, Universal Studios, Disney/MGM Studios and Walt Disney World all no more than an hour’s drive away. 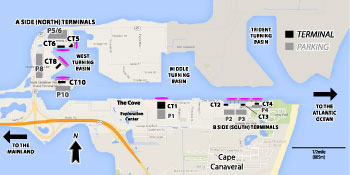