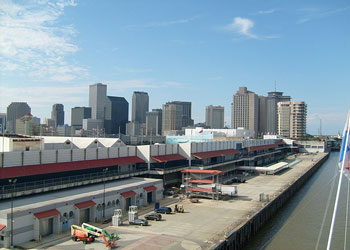 New Orleans, one of the US’s great historic cities, lies on the Mississippi river. The city winds along the river in a ‘C’ shape, so its second nickname, ‘The Crescent City’.

La Nouvelle-Orleans (New Orleans) was founded May 7, 1718, by the French Mississippi Company on a piece of land taken from native Americans. It was named after Philippe d'Orleans, Duke of Orleans, who was at the time the acting King of France for the child Louis XV. In settlement of war debts, France gave up control of Louisiana to Spain, who ruled the colony from 1763 until 1801. Several fires razed the original French buildings of the Vieux Carre, so the Spanish rebuilt the city in the characteristic style we see today.

In 1801 Napoleon Bonaparte annexed Spain into the French Empire and the territory reverted to French ownership. Then in 1803 the colony was sold to the United States in the Louisiana Purchase. Through the first half of the 19th century, New Orleans became rich, dominating the Caribbean region as the most prosperous port city trading crops like sugar cane, tobacco, fruit and rum. The abolition of slavery in 1865 took away the competitive advantages of the cotton plantations, and New Orleans lapsed into a time of little commercial activity.

Throughout its history New Orleans has relied on its banked levees, both natural and man made, to defend the city from flooding. But catastrophe hit in 2005 when Hurricane Katrina brought category 3 winds and a massive tidal surge, breaking over the levees, resulting in widespread flooding. The city has still not completely recovered from the damage caused by the hurricane.

Today the tourist visiting New Orleans will discover a city with a rich musical heritage, mouth-watering Creole cuisine, and a lively culture that is unlike anything else in the US.

Originally built for the 1984 World's Fair, the New Orleans cruise terminal facility has been modified often to keep up with the growing size of cruise ships and the rising number of passengers departing on cruises from New Orleans. The port has two distinct cruise terminals. The cruise port's two berths add up to a total of 792 meters in length.

Most cruises out of New Orleans visit ports in the Western Caribbean. Pick between short 4 cruises visiting Cozumel, 5 day cruises to Cozumel and Progreso, or longer 7 day cruises to 3 or 4 different ports.

Vacationers on cruises from New Orleans are able to visit a wide range of exciting sights at the ports of call - in Roatan snorkel in the crystal clear waters off Half Moon Bay beach, in Costa Maya visit the amazing rain forest, in Progreso take a shore excursion to the iconic Mayan ruins of Dzibilchaltun and in Belize experience exciting Cave tubing in the Sibun Caves.

In recent years the Bahamas has been offered as an alternative destination.
Things To Do Near New Orleans Cruise Port

Jackson Square
Jackson Square is at the center of the French Quarter, one of the best conserved historical neighborhoods in the US. The area even today has a distinct French and Spanish personality. A number of interesting buildings surround the square, such as the 1795 Cabildo, the place where the Louisiana Purchase was ratified in 1803, the 1791 Presbytére, currently the Hurricane Katrina museum and the St Louis Cathedral, originally built in 1724. Walk up the steps behind the Café Du Monde and find small Artillery park on top of the levee. From here you'll have a panoramic view of the mighty Mississippi river.

Bourbon Street
Bourbon Street, lined with adult clubs, bars, hotels, boutiques, jazz club and restaurants, is the busiest street in the French Quarter. Visit Pat O'Brien's bar, famed for the invention of the cocktail known as the Hurricane. Treat yourself to lunch at Galatoire’s Restaurant, founded by Jean Galatoire back in 1905, with its signature Creole menu. Unwind at the Old Absinthe House, where in 1874 the infamous Absinthe House Frappe drink was served by the owner, and order a glass of Herbsaint, a lawful alternative to banned Absinthe. Call at Jean Lafitte’s Blacksmith Shop, now a bar located in a 1722 creole cottage.

Moonwalk
The Mississippi river Moonwalk runs along the west side of the river from Jackson Square southwards to Canal street. The project was named for mayor Maurice Moon Landrieu, the mayor responsible for the building of the amenity. You can sit on one of the many iron benches perfect for some people watching, picnicking and boat spotting.

St Louis Cemetery #1
The centuries old above ground cemeteries of New Orleans are the only ones of their kind in the United States. Among the famous laid to rest here were Ernest Dutch Morial the city’s first black mayor, Marie Laveau the voodoo queen, Homer Plessey who tried to get Louisiana’s segregation laws overturned and Etienne de Bore sugar industry magnate. Be aware that St Louis #1 cemetery is known for vaporous apparitions, inexplicable happenings and strange sounds. The cemetery is a short walk north from the French Quarter.

St Charles St Streetcar
The St Charles streetcar is a pleasurable way to see another area of the city besides the French Quarter. The streetcar goes from the the French Quarter all the way down beautiful St. Charles Avenue. Enjoy some historic architecture beside the wide tree-lined street.

By Car
Follow I-10 south into New Orleans city center. Take exit 234A signed Business/Westbank to join US90. Follow US90, then take exit 11C, the last exit before the Mississippi river, signed Tchoupitoulas St and South Peters St. Merge with Calliope St. Turn right onto Religious St. Then make a left onto Henderson St.
For Whale parking lot. Make a left off Henderson St into Convention Center Boulevard. Continue for almost a mile then turn right into the car park.
For Erato St terminal parking lot. At the end of Henderson St turn left into Port of New Orleans Pl. Carry on for half a mile to get to the terminal.

From Louis Armstrong International Airport (MSY)
New Orlean's airport is approximately 16 miles from the cruise terminals. Vacationers on cruises from New Orleans can either catch the shuttle bus, or take a cab to travel from the airport to the cruise port. 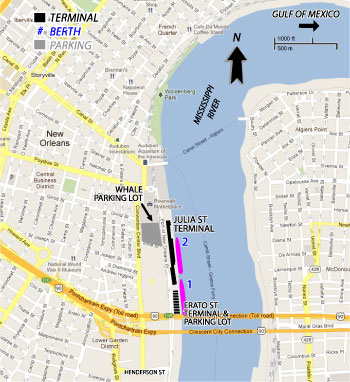