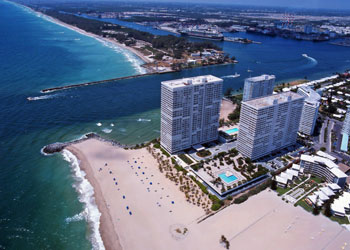 Fort Lauderdale's port is called Port Everglades, which is a misleading name, as it is not in fact located near the Florida Everglades. The port is situated on the coastline of the city of Fort Lauderdale, about 25 miles north of Miami.

Ft. Lauderdale is often referred to by its tagline, the 'Venice of America', because of its 270 miles of canals and waterways. The city was founded by Major William Lauderdale during the Seminole War of 1837-1838. The city grew rapidly during the land boom in Florida during the 1920s. Ft. Lauderdale has continued to grow, and its metro area now has over 4.5 million residents.

Port Everglades itself is a largely artificial harbor, built in the early 20th century. Joseph Young, the founder and mayor of Hollywood, bought a large plot of land with the ambition of creating a port. Next he started the Hollywood Harbor Development Company, and building began soon after, with the intention of creating a deep harbor to accommodate larger ships. In 1927 President Calvin Coolidge was invited to open the harbor, by detonating a part of the inlet channel. Things went wrong though when the detonator failed, and the port was officially opened without any spectacular explosions. Thanks to its deep-water inlet channel and moorings, the port developed rapidly into a busy hub of trade.

Today Port Everglades is used by several cruise lines as a departure point for Caribbean cruises. The port is the third-busiest cruise port in the world, drawing almost 3 million cruise passengers to its 11 cruise terminals. Currently the port holds the world-record for the number of cruise ships at harbor in a day, with 15 ships. Currently cruises from Fort Lauderdale are operated by several cruise lines, including Carnival, Celebrity, Crystal, Cunard, Disney, Holland America, Princess and Royal Caribbean.

All Midport's cruise terminals have basic facilities such as baggage handling, disabled access, an automated passenger loading bridge, seating areas, vending machines and restrooms. Terminal 18 has a dedicated parking lot, and terminals 19 through 29 offer parking at the large Midport garage. Terminal 18 is utilized by Royal Caribbean, 19 by Princess, 21 by Carnival Cruise Line, 25 by various cruise lines, 26 by Holland America Line, and 29 by various cruise lines.

Cruises available out of Fort Lauderdale include the Bahamas (Freeport and Nassau), the Eastern Caribbean (St Thomas, Tortola, San Juan and St Maarten), the Western Caribbean (Grand Cayman, Cozumel, Roatan and Belize), and the Southern Caribbean (Barbados, Curacao, Bonaire and Aruba). Other cruises from Fort Lauderdale on offer include extended trips, examples would be a voyage through the Panama Canal to the west coast of the USA, a cruise up the Amazon or an extended itinerary following the coast of South America.

Things To Do Near Fort Lauderdale Cruise Port

Riverwalk
At the heart of Fort Lauderdale runs the attractive Riverwalk, a boarded and paved path which hugs the banks of New River. Riverwalk North begins at Stranahan House, continues westwards to pass the Museum of Art, Bubier Park, and the Fort Lauderdale Historical Society, to end up at the Museum of Discovery and Science.

Stranahan House
Built in 1901 by Frank Stranahan, the ‘father of Fort Lauderdale’, and his wife Ivy, the city’s first school teacher, Stranahan House is the city’s earliest residence. The house has been preserved to offer an insight into Florida’s pioneer life. The house is positioned at 335 Southeast 6th Avenue, around 2 miles north west of the cruise port.

Bonnet House Museum And Gardens
This magnificent estate has its origins in the 1920s, when Frederick Clay Bartlett, an artist from Chicago, constructed the house as the perfect winter residence to get away from the northern chill. As well as the impressive house, the visitor can walk around the gorgeous subtropical gardens that extend more than 35 acres. The house is positioned between the Atlantic Ocean and intracoastal waterway on North Birch Road, about 4 miles north east of Northport.

South Beach Park
Fort Lauderdale has over 7 miles of broad sands, with lovely views over the Atlantic Ocean. South Beach Park is the closest beach to downtown. The lifeguard monitored beach is bordered by an artistic whitewashed wall, and paved promenade. The beach is perfectly suited for surfing, swimming, picnicking and relaxing. Many shops, restaurants and bars line popular Las Olas Boulevard, which intersects with Highway 1A near by the beach.

Getting To Fort Lauderdale Cruise Port

The majority of passengers booked on cruises from Fort Lauderdale fly in to Fort Lauderdale-Hollywood International airport, which is sited slightly more than a mile from Port Everglades. Transfer is easy by taxi or shuttle bus.

Port Everglades has three road entrances, at SE 24th street off US-1, Eller Drive and the 17th street causeway entrance at Eisenhower Bvld. You must have proper identification, such as a passport or driver’s license, to gain entry to the port.

Traveling North or South on I-95
Take exit #26 to I-595 East, signed Port Everglades. Carry on for just over a mile next take exit 12B. Follow Eller Drive to the I-595 East port entrance. 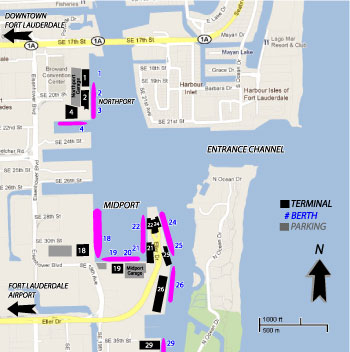