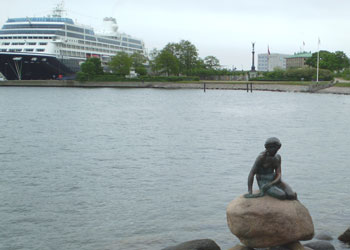 Visiting cruise ships to Copenhagen generally dock at Langelinie Pier, a short walk from the major sights. Smaller cruise ships may call at Nordre Toldbod. Cruise ships home porting out of Copenhagen use the Freeport or Ocean Quay facilities, both a bus shuttle ride away from the city.

Copenhagen, the capital city of Denmark, is situated on the large island of Zealand, some 150 miles northeast of the Danish mainland. The city is home to a population of over 1 million people, and is the biggest in the whole of Scandinavia.

The city has its roots in the mid 12th century when Bishop Absalon of Roskilde, the closest confident of King Valdemar I of Denmark, commissioned the construction of a stone castle and settlement fortified by moat and wall to keep watch on the strategic sea lane (now called the Oresund strait). Over the next 250 years trade and fishing brought great prosperity to the inhabitants, and in 1443 the settlement, which by now had grown into a small city, became capital of Denmark. King Christian IV, who ascended the throne in 1596, enlarged the city significantly by the addition of many impressive buildings, long streets and grand squares. The 18th century saw the birth of Copenhagen's historic Royal Danish Porcelain factory which began making porcelain with blue decoration in 1775. The first batches out of the factory served as dinner pieces for the monarchy.

Today Copenhagen has matured into a charming city, welcoming visitors from across the globe who arrive to experience its style, history and culture. The city is also an important departure point for cruises, thanks to its great air travel links and its location linking the Baltic sea with the Atlantic. Cruises from Copenhagen include the itinerary to the majestic Norwegian Fjords, or the trip around the magnificent cities of the Baltic.

Freeport (Frihavn)
The Freeport cruise terminal is a tented structure in a section of the busy North Harbor (Nordhavn) commercial port. Like Ocean Quay, the terminal handles mostly turnaround calls. Nowadays Freeport is not as busy as it was, due to the opening of the more modern Ocean Quay facility.

Langelinie
Langelinie is not a cruise terminal as such, just a long quay backed by a linear stone warehouse now converted into tourist shops. The quay is only used by visiting cruise ships. A Welcome Crew meet newly arrived cruise visitors distributing Cruise Copenhagen Maps and dispensing practical information. Sightseeing buses, city buses and cabs wait for customers a short distance from the ship. Though Langelinie is within easy walking distance of the city center.

Denmarks's harsh winter restricts the cruise ship calendar to the summer and fall. The two most popular cruises from Copenhagen are a voyage around the Baltic or the sailing to Norway.

On a Baltic cruise attractive excursions include the beautiful Royal Palaces of Stockholm, the medieval alleys of Tallinn, the massive Suomenlinna fortress at Helsiniki and Peter the Great's architectural wonders in St Petersburg. On a Norway cruise the list would be the awe-inspiring Norwegian Fjords, the Art Nouveau town of Alesund, the grand landscape of Geiranger, the Old Town of Stavanger and characterful Bryggen harbor in Bergen.

Things To Do Near Copenhagen's Cruise Ports

The Little Mermaid
The beautiful Little Mermaid statue has been admired and photographed by scores of tourists from all across the world and has become an instantly recognizable symbol of Denmark. The bronze statue was unveiled in 1913 at the Langelinie waterfront promenade, a stone's throw from the Langelinie cruise quay.

Nyhavn
Nyhavn, meaning New Haven, was originally a hard working commercial port where ships coming from all around the world would dock. It's now famous around the world for its beautiful town houses painted in a range of pastel colors backing the quayside. Hans Christian Andersen even lived here for a while. The harbor is home to the Veteran Ship and Museum Harbour and its collection of historical ships some of which are open to viewing by the public.

Rosenborg Castle
In the early years of the 17th century Christian IV authorized the construction of the magical Rosenborg Palace to act as a royal summerhouse. After the reign of Frederik IV, Rosenborg was only used as a royal residence twice, consequent to the fire at Christiansborg in 1794, and as a retreat during the time of the English attack on Copenhagen in 1801. Rosenborg Castle is open to the public all through the year, except Mondays during winter.

Walking Tour From Langelinie Pier
Being a compact city, Copenhagen is easy to tour on foot. A suggested route from Langelinie Pier which encompasses many must-sees would be:
Follow the waterfront south to
•The Little Mermaid
Continue along the waterfront to
•Amaliehaven Garden
Head inland to
•Amalienborg Palace
Continue along Tolbodgade to
•Nyhavn
Head inland to
•Charlottenborg Palace
Walk back along Bredgade passing (and visiting if of interest)
•Frederiks Kirke (the Marble church)
•Den Russiske Kirke (the Russian Church)
•Medicinsk Museion (medical museum)
•The Design Museum
Turn right onto Esplanaden then left into the
•Kastellet
Return to Langelinie Pier.

Traveling to the Cruise Terminals from the Airport

Passengers booked on cruises from Copenhagen can reach the cruise terminals by cab, or less expensively, by public transport.

By taxi
The easiest way to travel from the airport to any of the cruise terminals is by cab. 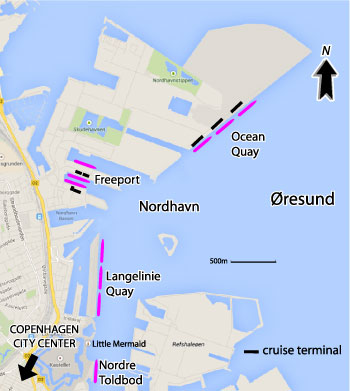