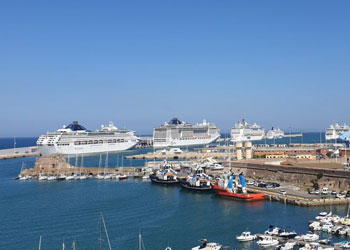 The Port of Civitavecchia on the west coast of central Italy. Rome is an hour away by train

Civitavecchia, The Port of Rome

Located around 80km north-west of Rome, Civitavecchia, translated as 'ancient town', is a busy ferry, cruise and cargo port with good transport links to the Rome area and the middle of Italy. There is a good rail service from Civitavecchia to central Rome, with services every half hour, and a journey time of around 70 to 80 minutes.

The Roman Emperor Trajan founded Civitavecchia Port in the 2nd century, calling it Centumcellae. Even today, remains of Trajan’s Port, which lie inside the modern port , can still be seen. Towards the end of the 15th century, Civitavecchia Port was attacked and damaged by pirates. Pope Julius II instigated the construction of a fort to protect the port. The works were completed by Michelangelo in 1537.

In the early 19th century the Port of Civitavecchia was connected to Rome by rail, which brought a period of prosperity to the town. World War II put an end to this though, bringing destruction to nearly three-quarters of the Port. Subsequent reconstruction enlarged the Port beyond its pre-war area.

Today Civitavecchia handles over two thousand ferry and cruise ship movements per year, for nearly 2 million passengers, making it the third busiest Mediterranean port. The port is a major cruise departure port, and there's a wide variety of cruises from Civitavecchia.

The Port of Civitavecchia contains more than twenty piers. Most of the port is utilized by ferry and container ships. Cruise ships mainly dock at quays inside the outer wall. The quays for cruise ships are 11 (Traianea), and 12/12B/13A/13B (Antemurale Colombo). Occasionally number 25 (Commerciale) across the harbor is also utilized. Currently the port has 4 cruise ship terminals, the Bramante at pier 12, the Amerigo Vespucci at 12B and temporary terminals at piers 11 and 25. Cruises from Civitavecchia normally use the piers adjacent to the cruise terminals.

Civitavecchia is a popular port of departure for a number of cruise lines including Costa, Royal Caribbean, Oceania, Celebrity, Seabourn, and Regent Seven Seas.

Things To Do Near Civitavecchia Cruise Port

As the official 'Port of Rome', the City of Civitavecchia is the gateway to one of the most beautiful and culturally fascinating cities in the world. Most cruise ship passengers see little of the Civitavecchia as they rush to make their way to the capital city.

But Civitavecchia itself has interesting sights deserving a visit, if you have a few hours to spend either side of your cruise. Wander through the city center, preferably with a map, and you will spot remains of the old city walls, Benedict XIV's fountain, ancient buildings such as the old hospital, quaint squares and a lot of Italian life. So combine a stroll through the town with a seafront sunbathing session for a very agreeable few hours. Selected sights of interest include:

Forte Michelangelo
The 16th Century fortress named Forte Michelangelo towers imposingly over the port. It was commissioned by Pope Julius II and finished in 1535 by Giulano Leno. The central tower was designed by Michelangelo. Built on the remains of Roman barracks of the Imperial Fleet, the fortress is made from walls over 6 metres thick.

Civitavecchia Beach
Steps from the seafront promenade, just opposite the train station, descend to a yellow sandy beach. The sea is remarkably clean and good for swimming.

Civitavecchia Old Town
Civitavecchia was heavily bombed during the second world war by huge squadrons of Flying Fortress's. But a small part of the medieval old town remains - start at Piazza Leandra, wander through the Archetto Passage to reach the Piazza Saffi. Keep an eye out for two charming Venetian era fountains.

Civitavecchia's Archaelogical Museum
This is located in a magnificent eighteenth Century building once owned by Pope Clemente XIII and constructed for the papal garrison. See an impressive display of artefacts mainly of Etruscan and Roman origin.

Travelling to the Port of Civitavecchia

From Leonardo da Vinci Airport
Passengers booked on cruises from Civitavecchia usually fly in to the Leonardo da Vinci (also called Fiumicino) airport. You should allow an hour for the transfer by road, or two hours by rail. If you've not booked the transfer at the same time as your vacation (normally advisable), the following options are available:
Taxi
A taxi ride from Leonardo da Vinci airport to the Port of Civitavecchia costs around 150 euros one way. Taxis are available outside the arrivals terminal. It's a good idea to only use registered cabs (white cars with a taximeter).
Train
Catch the train from the Leonardo da Vinci Airport to the Rome Termini/Roma Trastevere train station. Catch the connecting train from Roma Termini/Roma Trastevere to Civitavecchia. The journey takes about 80-110 minutes. Make sure you validate/punch your ticket before boarding the train.

From Rome center to Cruise Terminal
Train
The train to the Port of Civitavecchia runs from Rome's Termini train Station, situated in the center of Rome. Trains leave every half hour and cost about 11 euro per passenger. The journey takes between 70 and 80 minutes. The Port is a ten minute walk from Civitavecchia train station. Turn right as you leave the station, and follow the road that parallels the sea front. Frequent signs confirm you are going the correct way. When you reach the entrance to the port, adjacent to the Michelangelo fort, you will find a bus stop. Here buses run to the actual cruise terminals/piers. There's also an information kiosk which can be helpful. 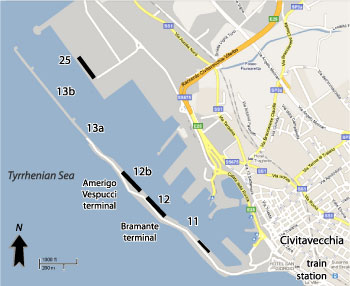