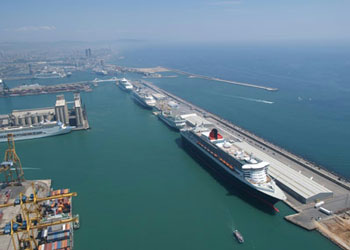 The Port of Barcelona, Spain

Barcelona is the capital of the Catalonia area of Spain, and Catalan is the predominant language. The story of the region and its dealings with the other parts of Spain is both fractious and fascinating

Barcelona hosts many Mediterranean cruise itineraries and is a brilliant sightseeing destination at either end of a your voyage. The city has many attractions, from wondering at amazing Gaudi buildings to laid-back people watching at a charming Las Ramblas coffee stop, and gives tourists a glimpse the attractive Spanish lifestyle. So it's not surprising that today cruises from Barcelona are more popular than ever.

Ships berth at Port Vell. The port has become a tourist attraction in its own right with a big shopping mall, a fun IMAX theater, and Europe's largest aquarium. Port Vell is next to the end of Las Ramblas, the iconic Barcelona boulevard packed with eateries and street entertainment that leads right into the center of the city.

The port has 9 cruise terminals at the Barcelona port, split into 3 locations.

Adossat Quay
Terminals A, B, C, D (Palacruceros) and E (Helix) are located at the Adossat Quay and are the greatest distance from the city center. The T-3 PORTBUS shuttle buses run from these cruise terminals to near the Columbus column at the bottom of Las Ramblas.

Most of the terminals have cafes and restaurants, and every terminal has a taxi rank.

There are a wide range of itineraries for cruises from Barcelona. A favorite is a 7 day circumnavigation around the Western Mediterranean. Sailing to the Greek Islands of the Aegean sea is another popular choice. Other ideas include heading westwards into the Atlantic to visit the Canary Islands, or travelling to the Eastern Mediterranean to see the Holy Land. The more adventurous can even choose itineraries heading through the Suez Canal, towards the Gulf States.

Things To Do Near Barcelona Cruise Port

It takes even an energetic tourist several days to tour Barcelona, so with only a single day, it'll be a rush. Don't miss well-known spots like La Sagrada Familia, Gaudi's iconic church, the medieval, characterful Barrio Gothic district, and the Picasso museum. Finally head up to Montjuic for a vantage point over the whole of the city and the surrounding countryside and ocean.

La Sagrada Familia
Barcelona's iconic church was designed by the much celebrated Gaudi. Work began in 1883, and the imaginative building is only now nearing completion. Interesting features are the nativity theme of the frontage, the towers decorated with mosaic work, and huge doors showing faith, hope and charity.

Barri Gotic
The Gothic Quarter has a characterful olde-world feeling. The narrow streets are packed with galleries, shops, bars, restaurants and pavement cafes. Art lovers will enjoy the Museu Picasso, featuring the artwork of Picasso. Another must see is the Cathedral of Santa Eulalia, a magnificent building with early-European architecture.

La Pedrera
Gaudí designed a fantastic house with undulating, lifelike forms for the property developer Pere Mila Camps. La Pedrera was Gaudi's last work before spending all his time to the construction of the Sagrada Familia.

Barceloneta
This area is beyond Port Vell, and was at one time a fishing port. It makes a pretty area, complete with brightly colored houses and a nice beach. Keen gamblers should check out the Gran Casino de Barcelona, which has slots, roulette tables and floor show.

From the City to the Port
Walking
The World Trade Center terminals are the nearest to the end of La Rambla, being approximately a 5 minute walk. However the Adossat quay cruise ship terminals, A, B, C, D, are a larger distance away and you need to catch a shuttle bus called the Blue Bus which picks ups at the memorial to Christopher Columbus and drops off at Adossat dock.
Metro
The Drassanes station (Green Line, L3) is no more than 5 minutes by foot from the Christopher Columbus memorial.
Taxi
A good choice is to catch a taxi from Barcelona's center to the port. This is inexpensive, cost around eight euros, and quick, generally less than ten minutes.

Travelling from the Aiport to the Port
Many cruise passengers on one of the cruises from Barcelona fly in to the conveniently situated Barcelona airport (code BCN). The transfer to the cruise port is very straightforward.
By public transport
Catch the Aerobus (from terminal 1 it's line A1, from terminal 2 it's line A2)) to Placa Catalunya in Barcelona, the service runs about every 10 minutes, then take the metro to Drassanes. From Drassanes it's an easy walk to the statue of Christopher Columbus at the port entrance. From here you can walk to the World Trade Center terminals, but if you're departing from the Adossat Quay terminals, wait for the Blue shuttle bus to take you there.
Taxi
The best way of transferring from the airport to the docks is a cab. The journey will take you about 25 mins and will cost you around thirty Euros in total. The price will cover per-bag supplements plus additional airport and cruise terminal charges. 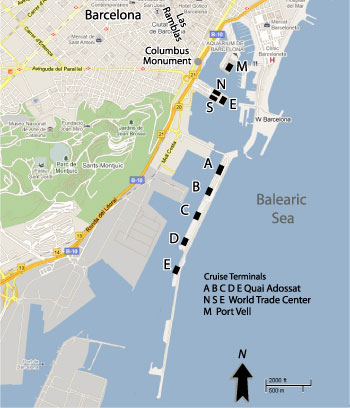