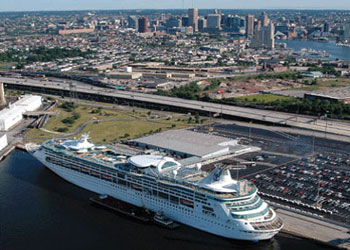 Baltimore is situated in central Maryland, on the banks of Patapsco river, which runs into Chesapeake Bay.

In the early 1700s, the region was a center of tobacco farming, and a port was constructed on the bay to facilitate the export of tobacco to Europe. Baltimore started as a little town next to the port, providing the needs of the flourishing trade. As other products like rum from the Caribbean and grain from neighboring farms were exported by the docks, the town continued to grow.

During the Revolutionary War Baltimore acted as the USA’s capital for a short time, when congress made the decision to relocate temporarily from Philadelphia. The war spurred ship building in Baltimore, and the Fell’s Point shipyards built both trade and privateer ships. In 1812, Fort McHenry was central in the brave defense of the city from attack by the British in the famous Battle of Baltimore.

In the middle of the 19th century the construction of the Baltimore and Ohio Railroad allowed the transport of corn from western states to the docks and provided a big boost to business in the city.

The 20th century started with disaster when in 1904 a great fire destroyed many buildings in the city’s center. The burnt-out buildings were rebuilt during a busy period of reconstruction. A further phase of redevelopment occurred in the 1980s, with an ambitious plan to redesign the Inner Harbor district.

This shoreline district today is very popular with tourists, and popular destinations include the Historic Ships Museum, the Maryland Science Center, the Baltimore Museum of Industry, the American Visionary Art Museum, the National Aquarium and Harborplace shopping center.

Baltimore has become the USA’s 8th largest port, extending over 23 miles of coastline. Aside from moving goods, the port has a modern cruise terminal. There are a wide variety of cruises from Baltimore on offer, including vacations to Bermuda, New England, the Caribbean and the Bahamas.

The Mayland Port Authority, in 2004, resolved to move the Dundalk cruise ship port. A large warehouse on South Locust Point was redesigned and opened as the Maryland Cruise Terminal in 2006, serving over one hundred cruises from Baltimore each year. The terminal building offers all the necessary services including pay phones, check-in desks, restrooms, an ATM and vending machines.

A big parking area for the use of passengers is situated beside the terminal.

The quayside only offers capacity for one cruise ship, with a berth 1139ft long, and 35ft deep.

Favorite all-year-round cruises include the Eastern Caribbean and the Bahamas. These destinations offer warm weather even in winter, with sunshine-filled days and balmy evenings. The hardy can even take a wintertime dip at the beach, though don’t expect the 'bathtub' temperatures of summer!.

In the summer, cruises to Bermuda are very popular and these typically stay two days so you can enjoy make the most of the warm sunshine and the exciting nightlife. Also on offer in the summer months are cruises following the eastern coastline of New England and Nova Scotia, stopping at charming and history-filled ports.

Things To Do Near Baltimore Cruise Port

The city has plenty to offer the visitor, with a whole series of enjoyable attractions. Call at the Inner Harbor Visitor Center where you’ll find leaflets, information and trail maps to help plan your day. Another good idea is to travel between the sights on the fun Baltimore Water Taxi.

Fort McHenry
Half-a-mile from the cruise terminal stands historic Fort McHenry. During the 1812 War, United States soldiers based at Fort McHenry succeeded in defending the city from attack by British forces in a ferocious fight. The Battle of Baltimore was witnessed by Francis Scott Key from a boat anchored in the bay, and he was inspired to write the words of the Star Spangled Banner.

Baltimore Museum of Industry
The museum details the history of industry and commerce in the Baltimore region from the early-19th century.

Federal Hill
Federal Hill was named after a long night of rejoicing thanks to Maryland’s insertion into the constitution of the USA. Revelers launched a mock ship, called the ‘Federalist’ from atop the hill into the harbor. It’s now a small green area, with tended paths and tall trees, giving magnificent views over Inner Harbor.

American Visionary Art Museum
This interesting museum is dedicated to the art of the untrained artist, if perceived of possessing an exceptional personal approach. Though untaught artists may be exceptional, and the sculptures and the paintings are engaging, surprising and enjoyable.

Historic Ships in Baltimore Museum
At the Historic Ships Museum check out the Lightship Chesapeake, the USS Torsk (a submarine with over ten thousand dives), USCGC Taney (the last remaining ship from Pearl Harbor), the Seven Foot Knoll Lighthouse (the oldest screw pile lighthouse on the Chesapeake) and the USS Constellation (flagship of the US African squadron in the mid 19th century).

Fell's Point
About a mile east of Inner Harbor stands the notable district of Fell’s Point. In the early 19th century US ships were mandated to attack British ships, and Fell’s Point was home to many yards constructing privateer ships. The cobblestone streets, cramped market places and tall period houses remind one of those bygone years. Today the tourist will also discover several cafes for a welcome rest from seeing the sights.

Getting to the Cruise Port

From The Airport
Baltimore Washington International Airport as regular flights from a multitude of places in the USA, and also internationally. Baltimore cruise port is about 5 miles from the airport, which takes just ten minutes by the cruise shuttle express or taxi.

By Car
Most passengers booked on cruises from Baltimore travel to the terminal by car - both Annapolis and Washington are just an hour away from the Baltimore cruise port.
From the North
Drive along I-95 southwards through the Ft McHenry tunnel. Keep in the right hand lane as you exit the tunnel. Take Exit 55, signed Key Highway and Ft McHenry. Pass below the interstate. Make a left at the traffic light to join East McComas street. Follow the signs to the South Locust Point Cruise Maryland Terminal.
From the South
Head along I-95 northwards to Exit 55, signed Key Highway. From the ramp, keep straight on East McComas Street. The Maryland Terminal is to the right. 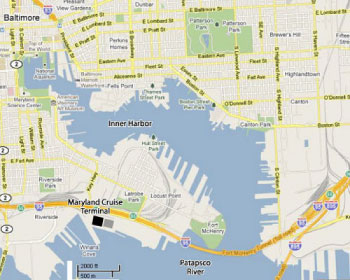